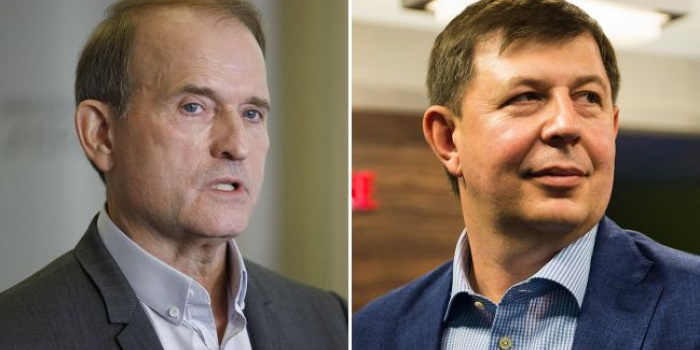 "I inform the public that today I put my signature on suspicion notices for two people's deputies of the Ukrainian parliament - M and K. We and our colleagues from law enforcement agencies carried out a lot of investigative actions, received many expert opinions and questioned valuable witnesses during the pretrial investigation. The work was made with mush of effect. We did everything we could to keep the information in a vacuum," Venediktova wrote.

According to her, the investigation and prosecutors have so far received "sufficient grounds to change their status from witnesses to suspects."

She added that the results of the searches did not establish Medvedchuk's whereabouts, and therefore the SBU is taking appropriate measures to establish it and deliver him a detention warrant.

“Conclusions. 1. Crimea cannot be considered part of another state. 2. It is not possible to facilitate and directly participate in the transfer of valuable documents relating to the Ukrainian subsoil, the monetary equivalent of the resources of which is UAH 38 billion. 3. It is not possible to become a legal successor of Ukrainian property, which by right belongs to the citizens of Ukraine. 4. It is not possible to disclose information containing a state secrecy. 5. It is impossible to create an army of news clowns and to pull the strings of them in their own anti-Ukrainian interests, ”Venediktova wrote.

As IMI reported, on May 11, the SBU Security Service of Ukraine (SBU) is searching the house of the MP from OPFL, leader of national civic movement "Ukrainian Choice - People's Right" Viktor Medvedchuk, as Interfax-Ukraine reported.

"Search is underway. In-depth comments on that point will be given later, " as the press service said.

Several places are searched, including his apartment in Montazhnykiv street in Kyiv, according to some source of information.

As IMI reported, on March 25, the SBU probed into the actions of representatives of "Ukrainian Choice - People's Right", who were suspected of being involved in the illegal referendum and elections in the temporarily occupied Crimea and Sevastopol in 2014.

The SBU conducts investigative actions within the framework of the initiated criminal proceedings under Art. 366 (official forgery) of the Criminal code of Ukraine. The issue of notifying participants of suspicions under Art. 110 (encroachment on the territorial integrity and inviolability of Ukraine) and Art. 111 (high treason).

On February 2, as IMI reported, on February 2, Volodymyr Zelensky has enacted the National Security and Defense Council decision of February 2, 2021 on the application of sanctions against MP Taras Kozak and television channels 112 Ukraine, NewsOne, and ZIK, the press service of the President's Office has reported.

On February 25, the Administrative Court of Cassation received a lawsuit from 112-TV Television and Radio Company (112 Ukraine) appealing to the Presidential Decree of February 2 to impose sanctions on him.