Ovsyannikova says she had come to Ukraine with a "good idea" in mind, but "barely escaped" 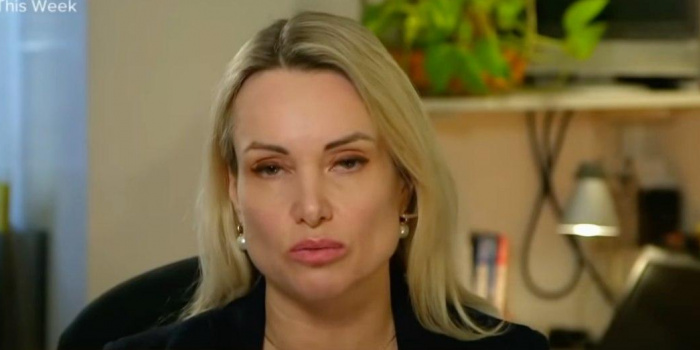 Marina Ovsyannikova, a former editor of russian propaganda channel "Pervyy" and now a journalist for the German newspaper Die Welt, said she had come to Ukraine with a "good idea" in mind but "barely escaped." She told Meduza about this.

According to her, she wanted to "help the authorities, record an interview with Zelenskyy, show Bucha and Kharkiv."

Ovsyannikova said that she had stayed in Ukraine from May 27 to 31. First, she went to Odesa, "recorded interviews with people, everything was fine." And after arriving in Kyiv and announcing the press conference "it began," as she put it.

"Journalists started shouting that I was a Muscovite, an FSB agent, a propagandist, that there were no former propagandists, that I should be arrested," she described the accusations against her.

"In the end, Die Welt service evacuated [me] in the most incredible ways. Out of fear, I even refused to meet [with the adviser to the head of the Ministry of Internal Affairs of Ukraine Anton Herashchenko, who offered to conduct an interview instead of a press conference], he immediately added me to the 'Peacemaker' database, and I fled. It was some kind of horror, we barely got away by car through Romania, I escaped miraculously," she said. At the same time, Ovsyannikova noted that she can understand the feelings of Ukrainians and agrees with the view that the people of russia are collectively responsible for the invasion of Ukraine.

On June 6, Ovsyannikova wrote two Facebook posts about the criticism she heard from both russia and Ukraine. The journalist asked "Which prison should I go to: russian or Ukrainian?" and posted screenshots with calls to ban her entry into Ukraine (from the Ukrainian Minister of Culture) and to revoke her russian citizenship (from the spokesperson of the russian State Duma). "My personal results of fighting against a senseless war," Ovsyannikova wrote.

On June 7, Ovsyannikova wrote on Facebook that she was not a "good russian" but a Ukrainian, and intended to change her last name to Tkachuk "to show her support of Ukraine."

As IMI reported, a press conference featuring Marina Ovsyannikova had been scheduled for June 1, but was cancelled due to "negative public response."

Director General of Interfax-Ukraine Oleksandr Martynenko told Detector Media that the press conference with Ovsyannikova had been organized at the request of Die Welt, where she now works as a columnist, with the help of Dutch volunteer and philanthropist Мariam Lambert and Ukrainian public and media organization Stop Corruption (StopCor). StopCor denied their involvement in the preparation of Ovsyannikova's press conference.