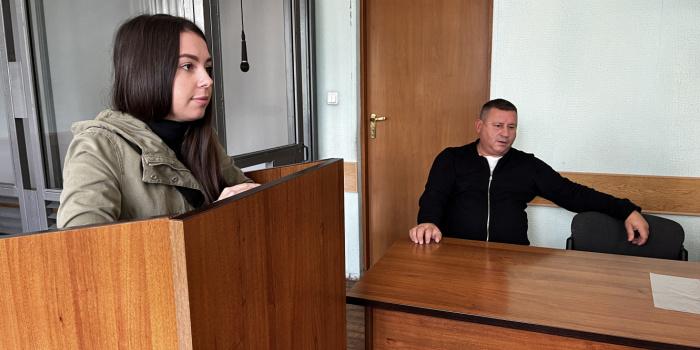 On September 13, the Suvorovsky District Court of Odesa questioned two witnesses in the case of an attack on Dumska TV filming crew that occurred last October, Dumska reports.

Namely, they interrogated Dumska TV correspondent Yulia Hetmanets and an employee of the cafe-bar "Lev" Olha Plaksunova, who had attacked her. According to the journalist, on October 4, 2021, she and the injured cameraman Yevhen Voytenko were checking the establishments that, as a meeting of the City Council apparatus had shown, were working without permits throughout the holiday season.

"The cafe's owner didn't like us filming, and he decided to force us to delete the footage. He used physical force and psychological pressure. The owner, Valeriy Chorny, was cursing us and threatened my cameraman with violence, and after that the beating started," said witness Yulia Hetmanets.

Meanwhile, Olha Plaksunova, another participant in the conflict who is a witness in this case, said that the journalists did not show any documents, which is why the scandal with the attack broke out.

"I saw a microphone on the journalist, and a large video camera on the victim, but I did not realize that they were journalists. If they had introduced themselves, nothing would have happened," said Olha. According to her, she heard the accused Valery Chorny cursing the victim, but did not see the suspect beating him.

A video recording from Yulia Hetmanets' gadget shows Olha Plaksunova also trying to snatch the journalist's phone from her hands so that she would not record the offense.

It should be noted that on the day of the attack, this case was included into the monitoring of journalists' rights violations in Ukraine. Also, the regional representative of the IMI reported this attack to the working group that focuses on countering the violation of the rights of mass media workers, involving the board of the regional prosecutor's office and the Prosecutor General's Office in Odesa oblast.

As reported by IMI, on October 4, 2021, in Odesa, employees of a cafe attacked Dumska TV filming crew while those were filming cafes that were working without a permit. The attacker hit TV channel operator Yevhen Voytenko several times.

The police opened a criminal case for obstructing the journalistic activities of the Dumska TV crew (Part 2, Article 171) of the Criminal Code of Ukraine.