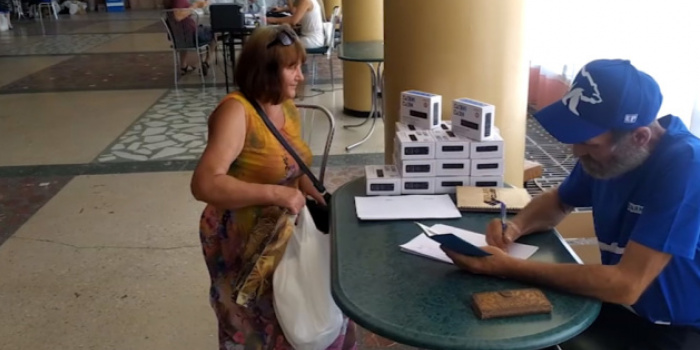 In Kherson, the occupiers are handing out T2 TV tuners along with "humanitarian aid." To receive a set, you have to give your passport details.

This was announced on Facebook by a Regional Council deputy, adviser to the head of the Kherson RMA Serhii Khlan, Ukrinform reports.

"Goebbels would cry with envy: in Yuvileyne (village. – Ed.) in Kherson region, the occupiers are giving out T2 TV tuners along with russian humanitarian aid," Khlan wrote.

"To get this 'set,' you need to provide full information about yourself: from passport details to a pension certificate. The russians want Skabeeva in every home to brainwash people," said the Regional Council deputy.

He asks the people of Kherson to explain to the pensioners what is really happening, that Ukraine will never abandon Kherson region, because Kherson region is Ukraine.

We remind that on May 30, the invaders disabled Internet and mobile communications from Ukrainian operators in Kherson region; they are blocking "green corridors," evacuation, kidnapping the region's civilian residents.

As reported by IMI, the russian occupiers in Kherson appointed former janitor Liliya Makarova as the "administrator" of their TV channel "Tavria," which was created on the basis of Suspilne.Kherson.

Kherson and part of the region are under russian occupation. Persecution and rights violations began almost on the first day of the occupation. For instance, on March 2, five armed russian occupiers captured the Suspilne.Kherson building. The occupiers disabled the broadcasting of Ukrainian TV channels and switched on russian channels in T2.