Not an IPSO, but a consequence of the years long propaganda – blogger Skhidny about the forcibly deported being bullied in Kadiyivka 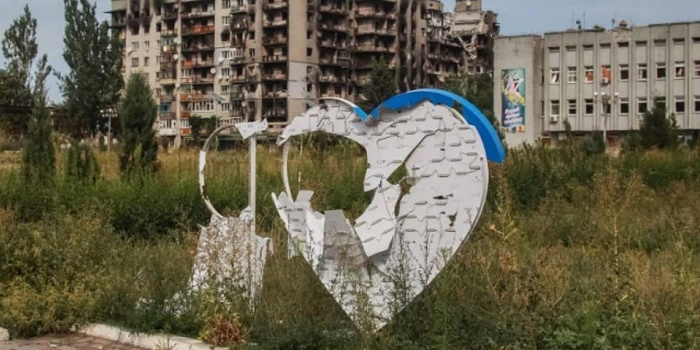 The discrimination against the people whom the Russians forcibly deported from the newly occupied cities to the long occupied ones is a consequence of the years long propaganda that Russia has been carrying out in the ORDLO territory for eight years.

This opinion was voiced by a blogger, author of the Telegram channel Pozyvny Skhidny in his comment to an IMI representative. For many years, he has been covering the events taking place in the territories that Russia occupied in 2014. At his request, we do not disclose his name.

According to the blogger, the media policy in Alchevsk-Kadiivka (Luhansk oblast) is somewhat different from the rest.

"Let's start with the fact that Stakhanov (Kadiyivka after the decommunization) is kind of the engine in the collaborationism machine in Luhansk oblast. Certain persons from our city and their 'gangs' played quite a big role in the Russian occupation of Luhansk oblast. Bolotov, Karyakin, Dryomov are our black spot. Of course, this inevitably affected the social situation in the city. Let's say, in 2014, we had a somewhat more intense 'Russian spring' and it was being heated up more than in many other cities. Then the appearance of the 'great army from the Don,' 'Dryomov's Cossacks' (they are the 6th separate motorized rifle regiment named after Platov). All this still leaves an impression on the public order in the city. As for the humanitarian situation, Stakhanov is not the best even compared to the smaller cities of the occupied Luhansk oblast. There are no enterprises that are fully working, and in general, you can only make a living by touring from job to job," the blogger notes.

He says (and this is evidenced by posts on the public page of the Stakhanov (Kadiyivka) occupation administration) that there was a large flow of deportees from Popasna to Stakhanov, and that Rubizhne residents were also brought in. 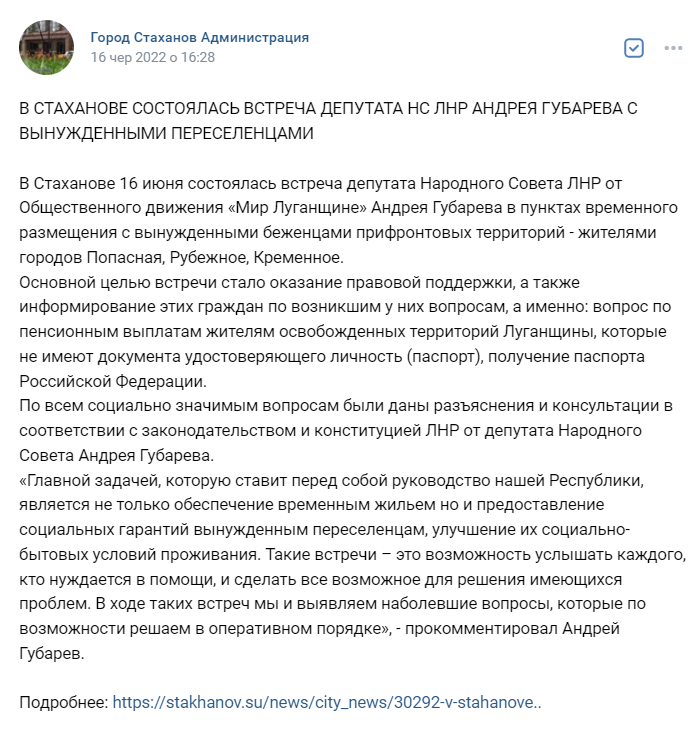 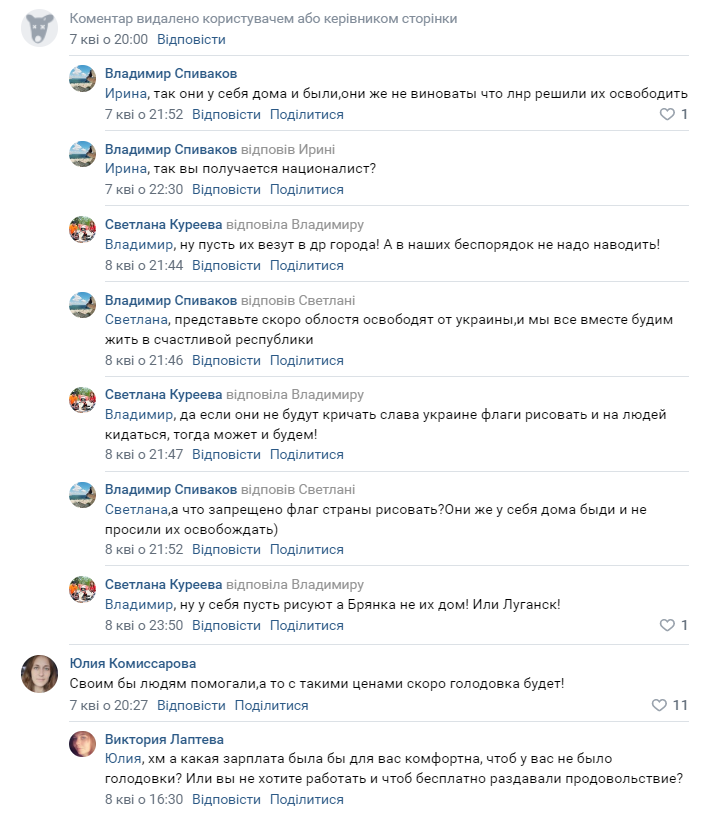 "For the most part, these people were simply loaded on buses and taken here, without even properly thinking about their accomodation, let alone any organized aid. Often, wounded civilians from Popasna were brought to the Stakhanov hospital – which is basically as cynical as it gets. First, GRADs fire at Popasna from Stakhanov, and then the locals who were affected by these GRADs are brought to the same Stakhanov to be 'rescued.' It's hard to even approximate how many such people there are," adds Skhidny.

People were placed in dormitories that have long been unfit for normal life. At the same time, Stakhanov residents were urged to donate socks and loaves of bread to the refugees. 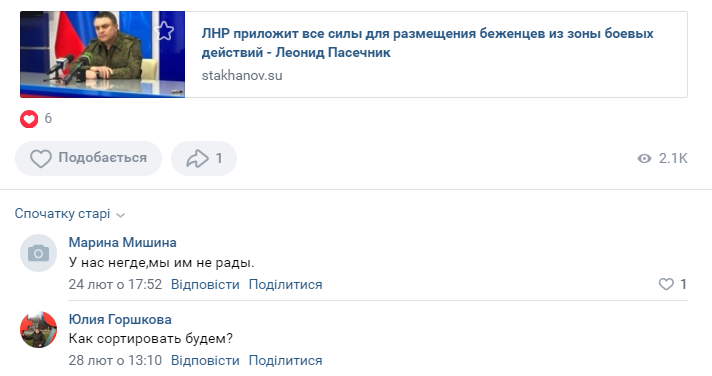 "They filmed some staged reports about various patriotic organizations arriving, arranging some entertaining skits for the refugee's children, pretending they were bringing aid. It all looked terrible," the man adds.

According to him, at first the locals paid no attention to this, although even then there were some voices saying things along the lines of "they betrayed the LPR, why would we help them: they chose life in Ukraine, so let them suffer."

"The discrimination that started was not limited to VKontakte public pages, because it all got there from the streets. It all started with conversations in shops, at bus stops, simply in people's kitchens: 'we have Nazis being brought to us.' There were legends about Ukrainian flags appearing in the city, hung by the refugees from Popasna and Rubizhne. At the same time, the most famous fable started circulating in the city: "Refugees were walking around the store with their children, and the children were shouting, 'Glory to Ukraine!' Moreover, a similar story was being spread around in absolutely every city of occupied Luhansk oblast," the blogger notes.

According to him, while in the middle of spring, the harassment of refugees only started because of the made-up "slogans and Ukrainian flags in dormitory windows," since June, the hostility towards the forcibly evacuated citizens in Kadiivka has been adamant.

"In June, the occupiers' bases in Stakhanov started getting destroyed one by one, ammunition depots and barracks were burning down. For some reason, the locals decided that the refugees from the neighboring towns previously controlled by Ukraine were to blame: 'They are targeting our boys!' In June–July, the refugees were being harassed for this constantly, because 'nobody touched our boys in the city until they came here.' They did not understand that this had to do with the high-precision Western weapons being supplied to Ukraine, and not with some grannies from Popasna adjusting the fire. But who would listen to such an explanation? After all, it was easier for the local pro-Russians to blame the refugees with radio beacons for adjusting the artillery fire, than to admit that the places where Russian occupiers are being deployed are totally vulnerable, thereby admitting the weakness of the Russian army," the blogger says.

He is sure that such discrimination from the locals is not some ISPO, but a consequence of the propaganda broadcast by the enemy across the years of occupation.

"I think that this is a completely natural process, but it arose from the many years of Russian propaganda. After all, for eight years, the local 'Cossack Radio' has been streaming horror stories about Popasna and how people there are being killed for being Russian, about the Nazis rampaging there, and other such nonsense. So, influenced by the propaganda machine, many people started hating the inhabitants of a neighboring town. I don't think the Russians devised any specific IPSO for this. But they definitely played a big role, because such madness is the long-term media conditioning of people in Russian-occupied cities. This is its consequences," the blogger summarized.

As IMI reported, the Telegazeta office in occupied Kadiyivka (Stakhanov pre-decommunization, Luhansk oblast) has been destroyed.

At the same time, in 2014, Telegazeta relocated to Starobilsk. However, after Russia occupied this city in March 2022, the editorial staff left it, and now works remotely in different parts of Ukraine.