In September, IMI recorded 15 violations of journalists' rights: threats at knifepoint and with gun

In September, IMI experts recorded 15 violations of freedom of speech in Ukraine. Mostly it was the use of physical aggression against journalists.

These are the findings of the monthly monitoring held by the Institute of Mass Information "Freedom of Speech Barometer".

In September, journalists became victims of beating, they interfered with their journalistic activity, threatened them and made pressure on them.

Thus, the largest number of violations was recorded in the category of " obstruction to legitimate journalistic activity" : 9 cases (this number slightly increased compared to August, when six such cases were recorded). Among the interference incidents, IMI experts noted some  which were due to start of the election campaign, as someone tried to put hands over the lens and grasped them by hands in courtroom. 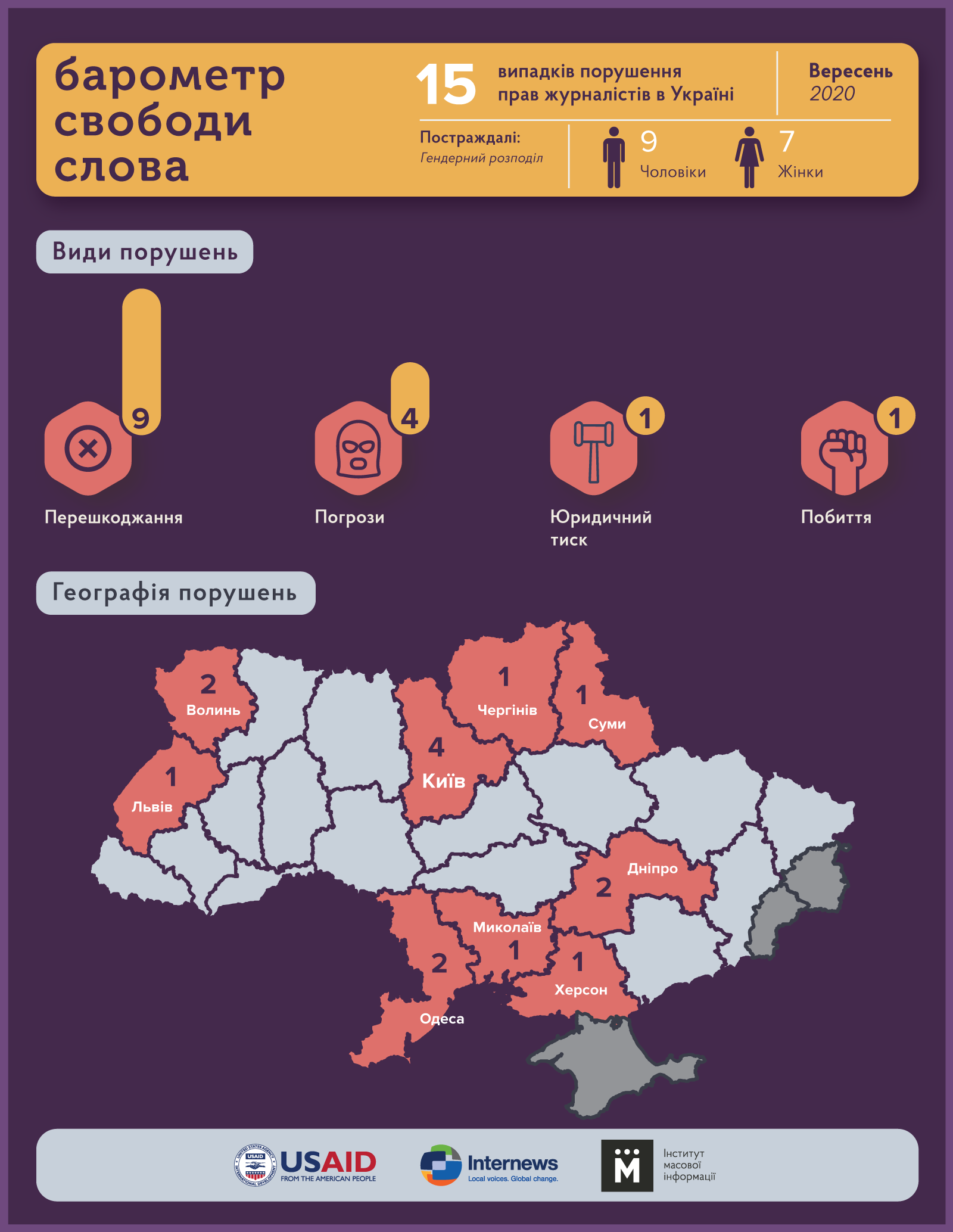 In particular, in Chornomorsk (Odessa region) on September 5, the city territorial election commission banned Andriy Smyrnov, correspondent for the local newspaper Vecherniy Chornomorsk and freelancer of the Chornomorsk NEWS website, to broadcast live of a public meeting.

In Lutsk and Lviv, journalists were unable to attend the “Servants of the People” and “Opposition Platform - For Life” party conferences to nominate candidates for local councils. Even despite their accreditation, they were denied access to the premises under pretext of lockdown measures.

In Mykolaiv, the press secretary of the Mayoral candidate from party "OPFL" Yury Bagryantsev hustled the journalist for an online edition "NikVesti" Alisa Melik-Adamyan out of the room where the city election commission was sitting. The police started criminal proceedings over that incident under Part 2 of Art. 171 of the Criminal Code “Obstruction to legitimate professional journalistic activity”.

Then, in terms of s number of violations, it followed by threats and intimidation of journalists : 4 incidents. In September, journalists were threatened at knifepoint (a BBC camera crew in Kyiv, the attacker was detained) and with a gun (person involved in a road accident in Kyiv threatened Magnolia TV cameraman Yegor Serdyuk with a gun).

There were also one case of beating and one of legal pressure.

The beating incident happened in Dnipro: the head of “Anti-Corruption Human Rights Council” news agency, public figure Oleksander Snisar, was hospitalized in critical condition after beating. Colleagues of the victim assumed that the attack might have been related to his journalistic activities, as he investigated corruption schemes of officials.

Violations were recorded in nine regions. Kyiv leads by the number of violations (four), followed by Volyn, Odesa and Dnipropetrovsk regions (two cases each), and one case each was recorded in Lviv, Kherson, Mykolayiv, Sumy and Chernihiv regions.

Nine men journalists and seven female journalists were subjected to pressure in September.

Thus, since the beginning of the year, IMI has recorded a total of 152 violations, 84 facts of obstruction to journalistic activity, 17 threats and 15 beatings.

The Institute of Mass Information conducts monthly national monitoring of freedom of speech in the following categories: physical aggression, censorship and access to information, economic and political pressure, legal pressure and cybercrime against the media and journalists. Only cases related to freedom of speech and professional journalism are included in the monthly report. You can read more about the methodology here.