MP from " Servant of the People" refused to answer to journalist: "Who are you to check up on me?" 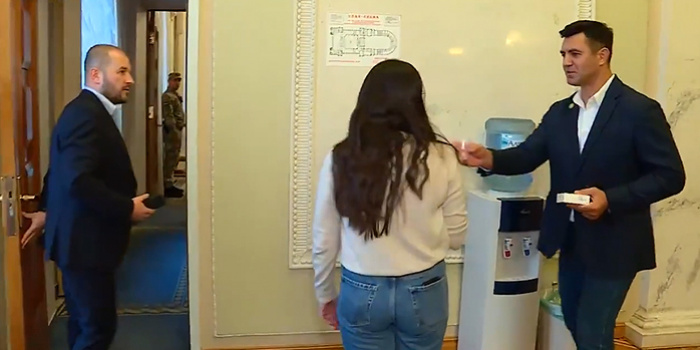 The MPs from "Servant of the People" Mykola Tyshchenko and Artem Kultenko refused to answer to the journalist of “Radio Liberty”’s the question about whom among the ministers they voted for, as “Radio Liberty” reported this on Twitter.

The journalist asked them to pass a test, whether they knew the newly appointed ministers and addressed a question to Mykola Tyshchenko, who is actually the Minister of Health.

“Miss, you have been asking this question for 50 times to all my colleagues today. Why are you doing this, what is your goal? "Artem Kultenko asked.

The journalist explained that many people criticize the deputies of the "Servant of the People" that they did not read the bills for which they voted. She added that she wanted to verify this assertion.

Instead, Mykola Tishchenko suggested to her: "Drink some water, it is good for you."

The journalist replied that the task of the media was to control the authorities. But, the MPs went silent.

As IMI reported, on September 10, the deputy chairman of the Mykolaiv regional state administration Oleksander Kushnir refused to answer the question of the correspondent of the local edition of "NikVesti" about his salary and financial assistance he received this year.

On September 18, the deputy chairman of the Mykolaiv regional state administration Oleksander Traitley refused to answer the question of correspondent of the local edition of "Nikvesta" Ivan Kazora about his activity in office.