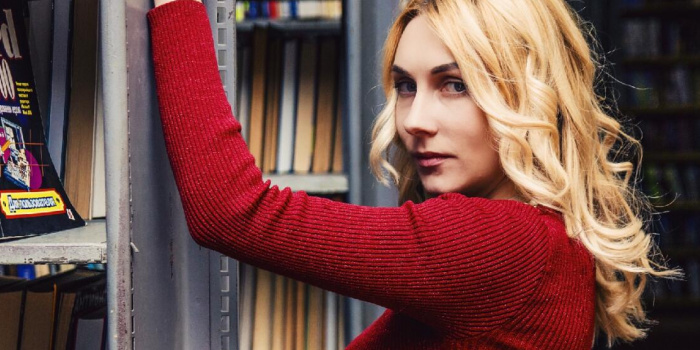 This was reported by the IMI representative in Zaporizhzhia region.

Local media workers told the IMI representative that the propagandists had offered her a job in Enerhodar because none of the local journalists agreed to such anti-Ukrainian activities.

The author of the reports, where she talks about the city's residents illegally detained by the occupiers for being allegedly engaged in subversive activities against the occupation authorities, has been added to the "Myrotvorets" database two and a half years ago.

As IMI learned, in one of the latest videos she "exposes" a detained Zaporizhzhia NPP employee who allegedly worked together with an SBU officer and delivered grenade launchers "to peaceful Melitopol." The video features a confession from a man who relates a memorized list of his actions and says he "repents," asks everyone "not to cooperate with those bandits, the special services of Ukraine," to surrender their weapons so as not to harm anyone, in particular "the military of the russian federation," promising that no one will be punished for this.

The story is voiced by a woman, and Valeria Pakhomova appears on screen several times. There is nothing else in the report except for the detained ZNPP employee's repentantce and the voiceover.

Valeriya Pakhomova (Tsaryova), according to her account on the russian social network Odnoklasniki, lives in Luhansk and 26 years old. Her parents, namely her mother Natalia Pakhomova (Babur), live in Debaltsevo, Donetsk region.

She also has a page on the Vkontakte network (banned in Ukraine), and a private account on Instagram, where she positions herself as a "fighter of the information front."

On the Myrotvorets website, where she was added on February 14, 2020, Pakhomova is listed as an "assistant of terrorists and russian occupiers" and an "anti-Ukrainian propagandist."

As IMI reported, since the beginning of the Enerhodar occupation, almost all Ukrainian media have stopped broadcasting. For instance, in March, the local Enerhodar television "ENTS" (Energodar Television Systems) was forced to stop broadcasting due to the occupation. In April, the russian occupiers turned on "radio russia." Currently, Ukrainian TV channels are being jammed in the city, and russian propaganda TV is being broadcast. There is also no Ukrainian mobile phone service in the city.