Kherson propagandist Hennadiy Shelestenko notified of being a suspect for collaborationism 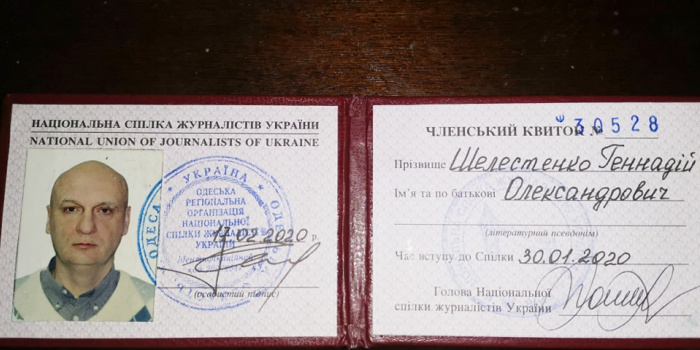 The law enforcement authorities issued a suspicion notice for collaborationism to Kherson journalist Hennadiy Shelestenko who is cooperating with the enemy to provide the russian army with information support. This was reported by the Office of the Security Service of Ukraine in Kherson region.

According to the investigation, at the beginning of the full-scale russian invasion, he voluntarily agreed to cooperate with the occupying authorities and has been responsible for media support of russia's armed aggression and of russia avoiding accountability for violence against Ukraine.

"To perform his anti-state activities, the traitor joined the so-called 'Military-civil administration' and joined the editorial board of one of the radical anti-Ukrainian online publications, for which he received a monetary reward in the enemy's rubles.

"In his posts, the journalist paints the invaders as saviors of Kherson region from a humanitarian disaster, avoiding the issue of what caused the food crisis and the war crimes. A separate component of his information expansion was the promotion of russian propaganda, forming narratives about the population's fear of the 'Nazis' and the 'charity' of the russian military in the society," said the SSU.

He has been notified of suspicion under Part 6 of Art. 111-1 (collaboration activities) of the Criminal Code of Ukraine.

As IMI reported, on April 27, the NUJU expelled Hennadiy Shelestenko, founder of the "Khersonsky Visnyk New" newspaper, for collaborationism and support for the occupation regime.

Illya Karamalikov has also called himself a journalist of the "Khersonsky Visnyk New" outlet, which belongs to Hennadiy Shelestenko. Shelestenko himself confirmed that Karamalikov was cooperating with the media outlet.

Yuriy Rabotin, head of the Odessa regional branch of the National Union of Journalists of Ukraine, confirmed to IMI that Illya was no longer a member of their organization. "About a year and a half ago, we admitted him. This happened. And then the decision was revoked," he said.

Rabotin confirmed that Karamalikov was among the people who were issued certificates under the protection of Hennady Shelestenko, who posted a video of certificates being given out, but under pressure from the media community, the decision to admit these people to the NUJU was revoked.