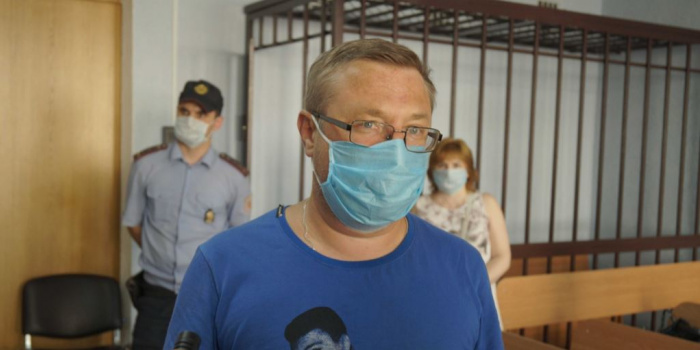 The Leninsky district court of Mohilyov (Belarus) arrested Volodymyr Laptsevych, journalist with “Mohilyov Region 6tv.by” online publication, for 13 days, for having taken part in a rally in protest against the inauguration of Alexander Lukashenko on September 23, the Belarusian service of Radio Liberty reported.

According to the case file the journalist was moving in a column of citizens who shouted slogans, had opposition symbols contesting the results of the presidential election.

Laptsevich did not admit his guilt and said that he did not take part in the rally, but he performed his professional duties of a journalist: he took photos and videos of what was happening.

The footage was broadcast on the publication's website. He watched a column of protesters from afar.

According to the newspaper, the only "proof" of the journalist's guilt in the case file was a five-second video made by operatives. It depicts a man similar to Laptsevich, but one could not see the protesters there.

The journalist was detained on September 27 and has been held in pre-trial detention since then.

He was tried via Skype. The video broadcast was constantly interrupted. Those present at the trial did not see the accused, but only heard his voice.

As IMI reported, on September 29, the Zhovtnevyy court in Minsk arrested a journalist and member of the Belarusian Association of Journalists, Olena Dovnar, for 15 days , accusing her of disobey to police and participating in an unauthorized rally.

As IMI reported, on September 23 in Minsk (Belarus) the apartment of the editor-in-chief of the opposition weekly "Nasha Niva" Yegor Martynovych was searched.

On September 23, Yegor Martynovych, editor-in-chief of the Nasha Niva newspaper, was detained for three days in Minsk for libel of Deputy Interior Minister Oleksandr Barsukov.