In May, IMI recorded 11 violations of freedom of speech in Ukraine

In May, IMI experts recorded 11 cases of violations of freedom of speech in Ukraine (January - 19, February - 18, March - 25, April - 18). Seven of them were the cases of physical aggression against journalists.

In May, the most often, the journalists faced obstruction of their professional activity (five cases) and denial  of access to public information (three cases). 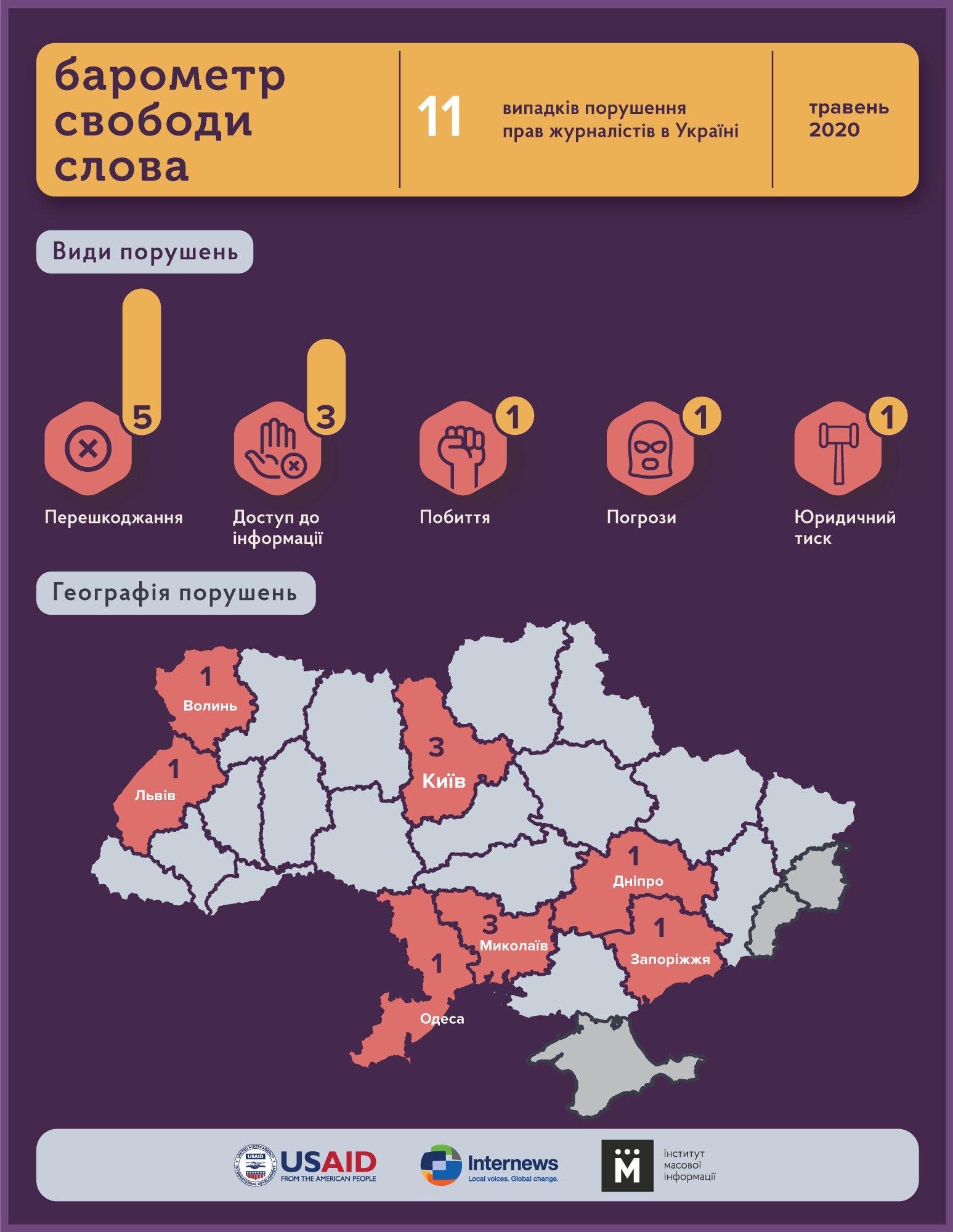 Three of five cases of obstruction are related to lockdown declared because of coronavirus pandemic. In particular, in Zaporizhia on May 7, an unidentified man attacked several TV crews with national TV channels. The journalists were filmimg a story about the violation of quarantine rules at “Bakhchisaray” market. The person followed journalists as soon as they entered the market territory and insulted them in coqrse lqnguqge. Then he attacked the operators and tried to tear their face masks off and damage the equipment. The journalists had to protect themselves and the equipment with a pepper spray.

In Lviv, on May 13, the journalists with Pershy Zakhidny TV channel were driven out from a hairdressing salon, they forbade them to film. The journalist Ksenia Pavlyshyn and the cameraman Yuriy Kish were going to shoot a story on lockdown easing and on beauty salons and hairdressers resuming its work.

On May 27, a number of journalists were denied access to the session of the Kryvyi Rih municipal Council, officials failed to provide any well-grounded explanation.

All three cases of denial of access to journalists to public information were recorded in Mykolaiv. The local authorities and law enforcement officers were involved in. Thus, the chairman of the Mykolaiv regional council Victoriya Moskalenko failed to reply to the information request of the journalist of the edition Prestupnosti.net about the amount of her salary.

Another request for information from Prestupnosty.net was left without reply, it was about renovation in the office of the head of the Security Service of Ukraine in the Mykolaiv region Vitaly Hersak.

The director of the municipal enterprise of the Mykolaiv regional council "Mykolaiv international airport" Fedor Barna refused to disclose the amount of his salary to the edition "NikVesti".

Thus, since the beginning of the year, IMI has recorded a total of 91 violations of freedom of speech, 45 cases of obstruction, 11 cases of beatings and eight cases of threats.

The Institute of Mass Information conducts monthly national wide monitoring of freedom of speech in the following categories: physical aggression, censorship and access to information, economic and political pressure, legal pressure and cybercrime against the media and journalists. Only cases related to freedom of speech and professional journalism are included in the monthly report.