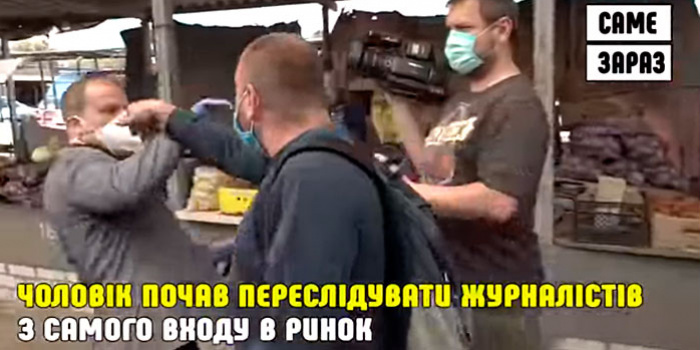 Photo credit: SCreenshot from the video made by Same Zaraz program

In Zaporizhzhya on May 7, an unidentified man attacked severfal TV crews with national TV channels. The journalists were filmimg a story about the violation of quarantine rules at “Bakhchisaray” market, as 061.ua reported.

The person followed journalists as soon as they entered the market territory and insulted them in coqrse lqnguqge. Then he attacked the operators and tried to tear their face masks off and damage the equipment. The journalists had to protect themselves and the equipment with a pepper spray.

As the IMI representative in Zaporizhzhya region told, among others there were TV crews of NTN, 112th and ICTV Channels.

Zaporizhzhya police department opened criminal proceedings for obstruction of lawful professional activity of journalists, as it is reported the website of police in Zaporizhzhya region.

"Police established that on the territory of the market of Zaporizhzhya district, the TV crews of national TV channels were filming the story about compliance with quarantine measures by commercial employees. An unknown person provoked a conflict involving the media professionals and hindered the cameramen to shoot the video”.

The police is probing into the case.