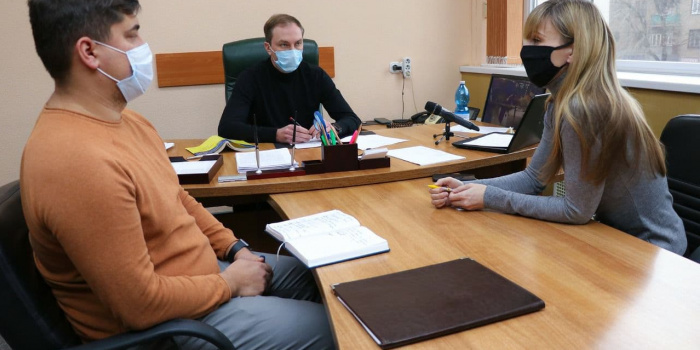 Photo credit: by Olena Lebedynska, press officier of the police in Zaporizhzhya region

Zaporizhzhya police will conduct repeated inspections on several facts of obstruction of professional activity of journalists, which was recorded by the Institute of Mass Information in Zaporizhzhya region.

In particular, the investigators are going to re-examine the facts of violation of the rights of Melitopol journalists, who were not allowed into the premises of Melitopolgaz on October 28 for public hearings on tariff increases. We will remind, the Melitopol city police department refused journalists in opening of criminal proceedings on this fact because militiamen didn't find structure of a crime in actions of gasmen.

Another inspection will be initiated regarding the denial of access for Bohdan Vasylenko, the editor of the Hvozdi media portal, to the session of the City Council on August 26, 2020, as well as the actions of law enforcement officers who, according to the editor, did not accept his complaint.

Also, according to Deputy Head of the Investigation Department Oleksandr Hryhoriev, after analyzing the publications on the IMI website, they are going to probe into the failure of the Zaporizhzhya Highways Service to respond to a request from 061.ua journalist Kateryna Mayboroda.

Today, the police probe in two criminal cases for obstructing the professional activities of journalists. In total, in 2019-2020, six criminal proceedings were opened for interference to professional activity of journalists. To date, five of them have been dropped due to lack of corpus delicti, and one criminal offense has been sent to court. It is about a July incident, when the TV crew for Z TV channel faced obstruction in its work. The man, knowing that a journalist was in front of him, hampered the journalist in her professional activity, in particular, threatened and tried to interfere with the filming of the report. Based on the results of the pre-trial investigation, an indictment was drawn up against the person who committed the criminal offense and the case has been sent to court.

According to Oleh Hryhorov, deputy head of the police in Zaporizhia region, such a high percentage of closed cases of obstruction of journalists 'professional activities was depending, among other things, on journalists' intention to get the case done, as sometimes the journalists refused to be involved in necessary investigative actions. At the same time, he stressed, all cases of crimes against media workers were under control of the National Police Investigation Department.

“Our employees constantly are monitoring the registration, detection and investigation of crimes of this category, studying the progress of pre-trial investigation in criminal proceedings and providing written instructions. I would like to emphasize that in order to protect one’s professional rights which had been violated through committing of a criminal offense, the media professionals / representatives of editorial offices should immediately complain to the law enforcement agencies. Submitting a complaint about a crime through the office and the inability to obtain an explanation from a journalist cannot but significantly complicate the investigation and solution of the crime, ”he said.

In general, Oleh Hryhorov stressed that the police was open and willing to cooperate with journalists and representatives of media NGOs and to hold such meetings systematically.