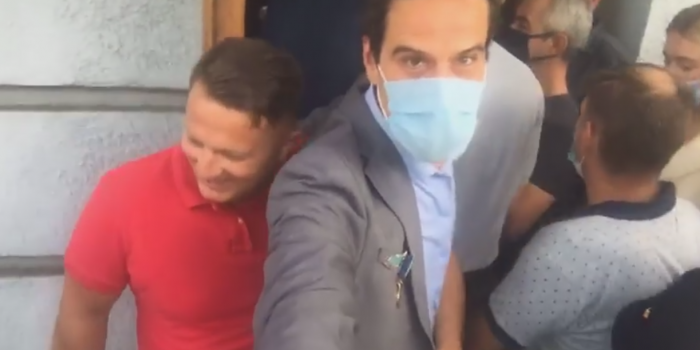 Photo credit: Screenshot from the video made by Bohdan VAsylenko

In Zaporizhia, Bohdan Vasylenko, editor of Hvozdy web-based edition, was barred from entering the city executive committee building on August 26. The officials shut the door in order to prevent him from entering the city council session. The journalist told it speaking to the representative of IMI in the Zaporizhzhya region.

According to him, he tried to get to the City Council session after consulting a lawyer about the restrictions imposed on the coronavirus.

“To prevent me from entering the building, officials first closed the city hall door from the inside. However, the situation quickly became derisory: not letting me in and the deputy of the regional council Yuriy Khokhlov, the door was not opened even for two heads of departments and several deputies of the City Council who approached the entrance. The things got more complicated, as the Deputy Minister Oleksandr Tereshchenko came, he had a meeting set up with Volodymyr Buryak, as the editor said. - When the door was opened to let in the Deputy Minister, I also tried to pass. Two staff members of the city executive committee and an unknown young man of athletic build literally took me out of the corridor. At the same time, the police did not interfere in what was happening. "

According to Bohdan Vasylenko, the officials justified their actions by the decision of the "emergency anti-virus commission", which had no authority to issue such decisions. "Anti-virus excuses look, in principle, ridiculous: during the long meeting, only on a pair of deputies wore the face masks", - the journalist said,

Then Bohdan Vasylenko called the police and filed complaint with the police, claiming about the fact of obstruction to his professional activity.

“The unit (of police- n.transl.)  arrived and took the complaint. But a day later it became clear that no one would enter the data on my complaint into the unified register of pre-trial decisions. So I wrote another complaint: requering to explain why my case was not included in the Unfied Register of Pre-trial Decisions. With this explanation, it will be possible to seize the court and force the police to perform their duties. If the coercive actions of three civilians, and what’s more officials, against a journalist in an administrative building do not fall under Article 171 of the Criminal Code of Ukraine, then what does it protect journalists from? ” Said Vasilenko.

According to the IMI representative, on the eve of the session, on August 25, the City Council made public the announcement on its website : “ The way the 52nd session of the Zaporizhzhya City Council will take place ”. The report, in particular, mentioned the restriction of access to the session uner lockdown and said that the session would not suppose the presence of the press.

At the same time, access to the session of the regional council remains open for journalists, the representative of IMI said.

It will be recalled that the Zaporizhia region is part of the "green zone", where lockdown restrictions are minimal.

The video, which was published on Hvozdi website, shows that a man whom Bohdan Vasylenko called "Chief of Domestic Policy Serhiy Shuldyk" pulled him from the entrance of the city executive committee. Later, Vladyslav Nikolayev, head of the Department of Internal Policy, Press and Information, joined the official and, pushing the editor to leave, tried to persuade the journalist to stop.

IMI lawyer Ali Safarov noted that in the context of pandemic, local authorities may impose certain restrictions on access to the premises, but since quarantine restrictions are currently minimal for the region, this case can be considered as an obstacle.

“In the context of a pandemic, in case if the lockdown was set by the Cabinet of Ministers of Ukraine, the local authorities, heads of enterprises, institutions, organizations can really establish certain restrictive measures, in particular regarding admission to the premises. This right is provided by the Law of Ukraine "On protection of the population from infectious diseases". But, such restrictive measures had to be clearly defined by the relevant administrative acts of local authorities and do not exceed the restrictions established by the relevant resolution of the Cabinet of Ministers and the law. At the same time, the right of journalists to be in the epidemic zone, as defined in Article 25 of the Law of Ukraine “On Information”, must also be taken into account. Given that the lockdown restrictions for Zaporizhia region are currently minimal, the restriction of a journalist's admission to the session exceeded the norms established by the Cabinet of Ministers and had signs of unjustified restriction of freedom of speech, and thus it had signs of a crime under Article 171 of the Criminal Code, ”the lawyer said.

As IMI reported, on June 6 in Zaporizhia, the editor-in-chief of the Gvozdy portal, Bohdan Vasylenko, was prevented from filming a fire at a shoe factory.