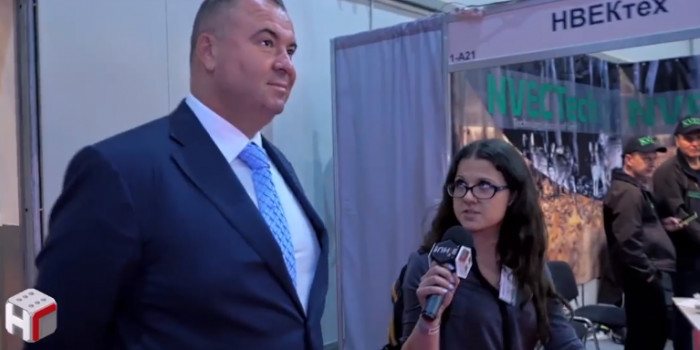 Screenshot from the video "Nashi Hroshi" (Our money) program

The Vinnytsia City Court is considering a lawsuit filed by Oleh Hladkovsky, former first deputy secretary of the National Security and Defense Council of Ukraine, against Bihus.info journalists. The plaintiff demands to refute the information presented in one of the journalistic investigations and more than two million hryvnias (around $72 million) for moral damage, as Vezha reported.

The preparatory hearing in the case took place in court on December 14. The defendants in the case are Bihus.info journalists Denys Bihus and Lesya Ivanova, as well as the public organization "Tom 14" (founded by members of the author's team of the program "Nashi Hroshi” (Our Money).

The plaintif demaded to declare as untruthful the information from the journalistic investigation “Army. Friends. Dinero ”within the project“ Our money with Denys Bihus ”.

In addition to judge Lutsenko, the plaintiff's representative Vasyl Vityuk was present in the courtroom. Representatives of the defendants Oleksandr Burmahin and Yevhen Vorobyov took part in the hearing via video link.

As Vasyl Vityuk told the publication, two million hryvnias of compensation have been claimed for payment to the charity foundation “Come back Alive”. At the same time, the plaintiff's lawyer did not specify what exactly was the information they required to refute, as he was not authorized to do so by the client.

However, Denys Bihus's lawyer Oleksandr Burmahin made it more precisely , saying that the lawsuits aimed to refute the report from the story “The President’s friends steal from defense sector (classified correspondence) ”(from the 27th to the 29th minute). This includes the details, as it follows:

“A group of young men enters into a conspiracy with defense officials, they buy up some military spare parts from Russian smugglers, as well as from the warehouses of the Ukrainian army, drive up prices many times and by conspiracy with the state concern Ukroboronprom sell it to its plants. The group includes: Deputy Secretary of the National Security and Defense Council Oleh Hladkovsky… ”- as they said in the claims.

The plaintiff required to refute it within a month from the date of judgement for him.

The plaintiff also demands jointly to recover from the defendants in favor of Oleh Hladkovsky non-pecuniary damage in the amount of 432 minimum wages (2,040,336 hryvnias) and court costs.

In the motivating part of the statement of claim, Hladkovsky Sr. noted that he was going to transfer the money to the charity foundation “Come back Alive". Which, in our opinion, shows that no moral damage was done to him. Because moral suffering is experienced by a particular person, for which he must personally receive compensation. Without any transactions, ”Oleksandr Burmahin added.

According to Burmahin, the defendants strongly disagree with all the claims, in particular, because the plaintiff missed the statute of limitations to go to court.

A number of motions were filed during the court hearing. For example, Denys Bihus, through his lawyers, asked to change the jurisdiction of the case, noting that although he was registered in Vinnytsia, he actually lived in Boryspil, so he asked that the case be considered in Boryspil.

The lawyer Vorobyov pointed out that the NGO "Tom 14" is registered in Kyiv, so he also supported Bihus' petition. Hladkovski's lawyer objected, noting that the place of registration should be followed.

In the end, Judge Lutsenko denied the journalist's request, so the case will still be heard in the Vinnytsia City Court.

Defendants' attorneys also pointed to the need to adjourn the hearing because they had not yet received all the case materials, so they needed time to prepare.

Due to this, as well as the absence of journalist Lesya Ivanova in court, the case was postponed until 10:00 on January 21.

As IMI reported, on December 9, 2020, On December 9, the Kyiv Court of Appeals upheld complaints from Bihus.Info journalists Denys Bigus and Lesya Ivanova and overturned a decision by Kyiv's Podilsky District Court to refute report about the involvement of Igor Hladkovsky, the son of the former deputy secretary of the National Security and Defense Council, into embezzlement schemes in defense sector, as Bihus.Info reported.

As IMI reported, on February 25, 2019, journalists of the Bihus.Info project published an investigation into corruption in the defense sector. The investigation made public by Bihus.Info revealed that Ihor Hladkovskyi and his partners had been providing double or even four times higher overcharged contraband pieces and parts from Ukrainian military units through some front companies. The journalists told that in the Autumn 2018, they had received an anonymous letter citing the participants of those deals and after having verified this information, the journalists came to conclusion these facts were truth. As to Bihus.Info the embezzlement was up to 250 millions of hryvnias ($ 9 millions) at least. The authors of investigation claimed Oleg Hladkovskyi would be involved to these deals, as in the past he was a business partner of Petro Poroshenko, actual head of state, and Pavlo Bukin, head of public corporate group Ukroboronprom (Ukrainian defense industry) and other heads of enterprises and functionaries. February 26th, Ihor Hladkovskiy, son of the First deputy to the Secretary of the National security and defense council Oleh Hladkovskyi is to sue the Bihus.Info for defamation. March 4th, president Poroshenko fired the National Security and Defense Council deputy secretary Oleg Hladkovsky.