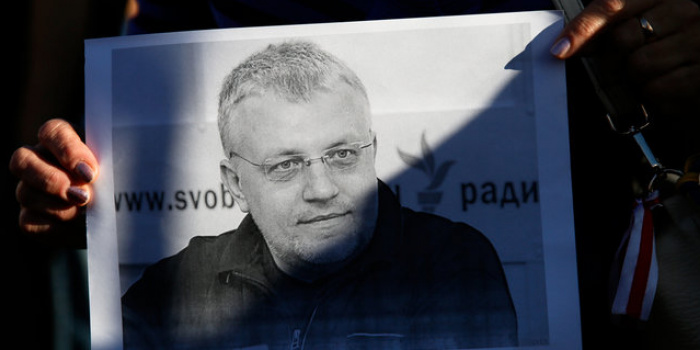 The Council of Europe calls on the Ukrainian authorities to take into account evidence of eventual involvement of the KGB in Belarus while investigating into the murder of journalist Pavel Sheremet. This is said in the report for 2021 of the Platform of the Council of Europe for the Protection of Journalism and the Safety of Journalists, published on April 28, as Ukrinform reported.

“Finally, in light of new evidence of the Belarusian KGB’s possible involvement in the murder of Pavel Sheremet, we urge the Ukrainian authorities to undertake a fresh investigation into the circumstances surrounding his murder," the Council of Europe said.

According to current statistics, as of April 28 and since 2015, the platform has registered 60 reports of threats to the security or activities of journalists in Ukraine. In addition, seven reports came from the territory of the temporarily occupied Crimea and three cases - from ORLDO.

As for Ukraine, the Council of Europe states five cases of imprisonment of journalists and five murders of media representatives.

As IMI reported, on January 4, 2021, In 2012, the chairman of the State Security Committee of Belarus, Vadym Zaytsev, mentioned a possibility of murdering the journalist Pavel Sheremet with an explosive device. This was reported by the "Belarusian People's Tribunal ", the Belgian publication EUobserver and " Ukrayinska Pravda”.

These editions published recordings of a conversation on April 11, 2012, in which the voices are similar to those of the then KGB chief Vadym Zaitsev and employees of the counter-terrorist unit of the KGB "Alpha". More specifically, he was briefing members of the Alpha Group's Seventh Department, a clandestine task-force, which Zaitsev had created to target the regime's political enemies.

In particular, the head of the KGB spoke of the method of killing Pavel Sheremet, who lived in Russia at the time. " "We'll plant [a bomb] and so on and this fucking rat will be taken down in fucking pieces - legs in one direction, arms in the other direction. If everything [looks like] natural causes, it won't get into people's minds the same way," Zaitsev said.

On January 18, a former second-in-command officer of  the  “Almaz” special forces unit of the Ministry of Internal Affairs of Belarus, now a member of the civic project "Belarusian People's Tribunal" Igor Makar testified in the case of the murder of journalist Pavel Sheremet, as the Belarusian desk of Radio Svoboda reported.

“On January 16, I came back from Kyiv to Vilnius. After my report about what was happening in the office of KGB Chairman Zaytsev in 2012 was made public, some Ukrainian diplomats contacted me and suggested to cooperate in order to contribute to solving the murder of Pavel Sheremet. At the request of the head of the National Police Department of Ukraine, I got a visa to Ukraine and was asked to take a flight for Ukraine and to take part in the investigation, ”he said.

According to Makar, he was met by special services in Ukraine and was also provided with round-the-clock protection.

“We conducted some investigative activity and other in the National Police, after which the Ukrainian side informed me that they had no reason not to trust me. In my opinion, I have given enough grounds to claim that the Belarusian special services have something to do with the order to kill Pavel Sheremet, ”he said.

In addition, Makar said that he provided the Ukrainian side with much more information than he published in mass media. "We agreed, and I promised not to disclose my testimony, as it could affect the investigation. Trials are already underway in this criminal case, and it is very important that this information does not get anywhere, ”he said.

He believes that the investigation of the case will "radically change" as a result of the information provided by him, and is convinced that the crime will be solved.

"I am convinced that regardless of who is currently detained and who is suspected, the investigation will be completed in the case and find out who precisely committed the murder and who was the direct mastermind of this high-profile murder," he said.

As for the reasons for the murder of Pavel Sheremet, in his opinion, 60% of them are related to the cases of the persons who went missing.

“Pavel also took a close part in the investigation of the explosion in the Minsk metro in 2011. In my personal opinion, after comparing a number of facts and talking to Ukrainian investigators, we can talk about Alexander Lukashenko's hatred toward Pavel Sheremet. All this together could be the reason for his elimination. And it was done as a emblematic murder, "he said.

Makar, citing his sources in Belarus, said that the publication of the audio recording caused some "considerable anxiety in the KGB."

It will be recalled that Igor Makar handed over a recording of a conversation in 2012 involving a person whose voice resembled the voice of the then chairman of the State Security Committee of Belarus Vadim Zaytsev to the Belgian publication EUobserver.