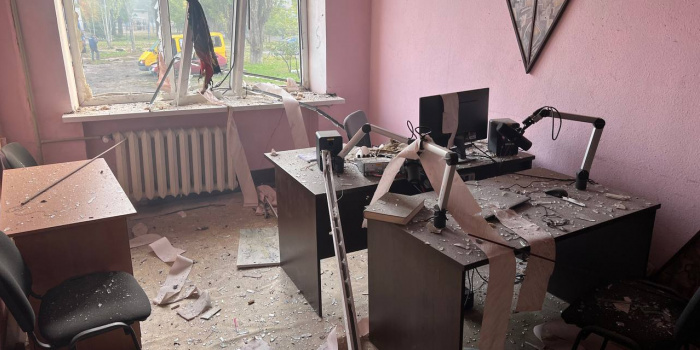 In occupied Melitopol (Zaporizhzhia oblast), a car exploded next to the building that houses the propaganda TV company "ZaTV", as well as the offices of the Russian FSB and Yevgeny Balytsky, the Zaporizhzhia oblast governor appointed by the occupying authorities.

This was reported by Melitopol Mayor Ivan Fedorov, as well as Russian propagandist social media groups.

"Kremlin propagandists had an unfortunate smoking break next to the ruscist FSB department, which is located in the same building with Melitopol's Gauleiter Balytsky. "According to preliminary information, the car exploded next to the office from which the russian media rebroadcasts," Fedorov wrote.

Russian propagandist Aleksandr Malkevich, who is working on the development of the "ZaMedia" holding (which includes "ZaTV") in the occupied part of the Zaporizhzhia oblast, reported five of the holding's employees being injured. He added that significant damage was caused to the media's property. The "ZaRadio" studio, from which the propagandists conducted their broadcasts, was also damaged.

As IMI reported, on August 1, new propaganda TV channel "ZaTV" started working in occupied Melitopol, Zaporizhzhia oblast. There are Russians working at the channel. NAmely, Vadim Ivanov, a Russian propagandist who used to work for the VDTRC, has become the director of the "ZaTV" company. Media holding "ZaMedia" is being created by Aleksandr Malkevich, the CEO of the "St. Petersburg" TV channel (which is funded by the city's authorities), a member of the Russian Civic Chamber, and a finalist in the "Russia's Leaders" competition, which is patronized by the deputy head of the presidential administration Sergey Kiriyenko. Malkevich is also closely associated with "Putin's cook" and the owner of PMC "Wagner" Evgeny Prigozhin.

The structure of the media holding "ZaMedia" also includes the propaganda radio "Za!Radio" and the newspaper "Zaporozhsky Vestnik".