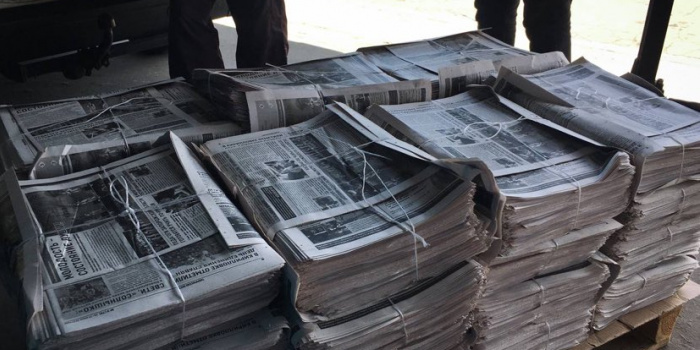 "Zaporozhsky Vestnik" weekly, printed at a Crimean printing house with a circulation of 200,000 copies, is being distributed in the occupied territories, namely in Melitopol, since last week.

This became known from posts on anti-Ukrainian Telegram channels belonging to the self-proclaimed authorities of the Zaporizhzhia region's occupied cities. At the same time, the collaborators do not emphasize the fact that the weekly is being printed outside of the region, in the annexed Crimea.

The weekly's first issue was printed on July 12, 2022. The color edition has eight pages, is written in russian and filled with propaganda and entertaining content. In particular, the first page contains a photo of the russian president vladimir putin, with the headline: "We are together! We are one people!" His quote is also provided: "The future of the people who live there will be determined only by them. And we will respect their choice."

As the IMI representative in Zaporizhzhia region notes, all the content in the issue contains some kind of propaganda or anti-Ukrainian calls such as "The russians don't abandon their people," with the image of the main collaborator, the self-proclaimed head of Zaporizhzhia region Yevhen Balytsky, or "He knew what to do with the Banderites," or "Hope for a future with russia," "Hysterics of Ukrainian butchers," etc. At the same time, the articles have no authors, and the source data has no indication of the editor-in-chief or the composition of the editorial board. 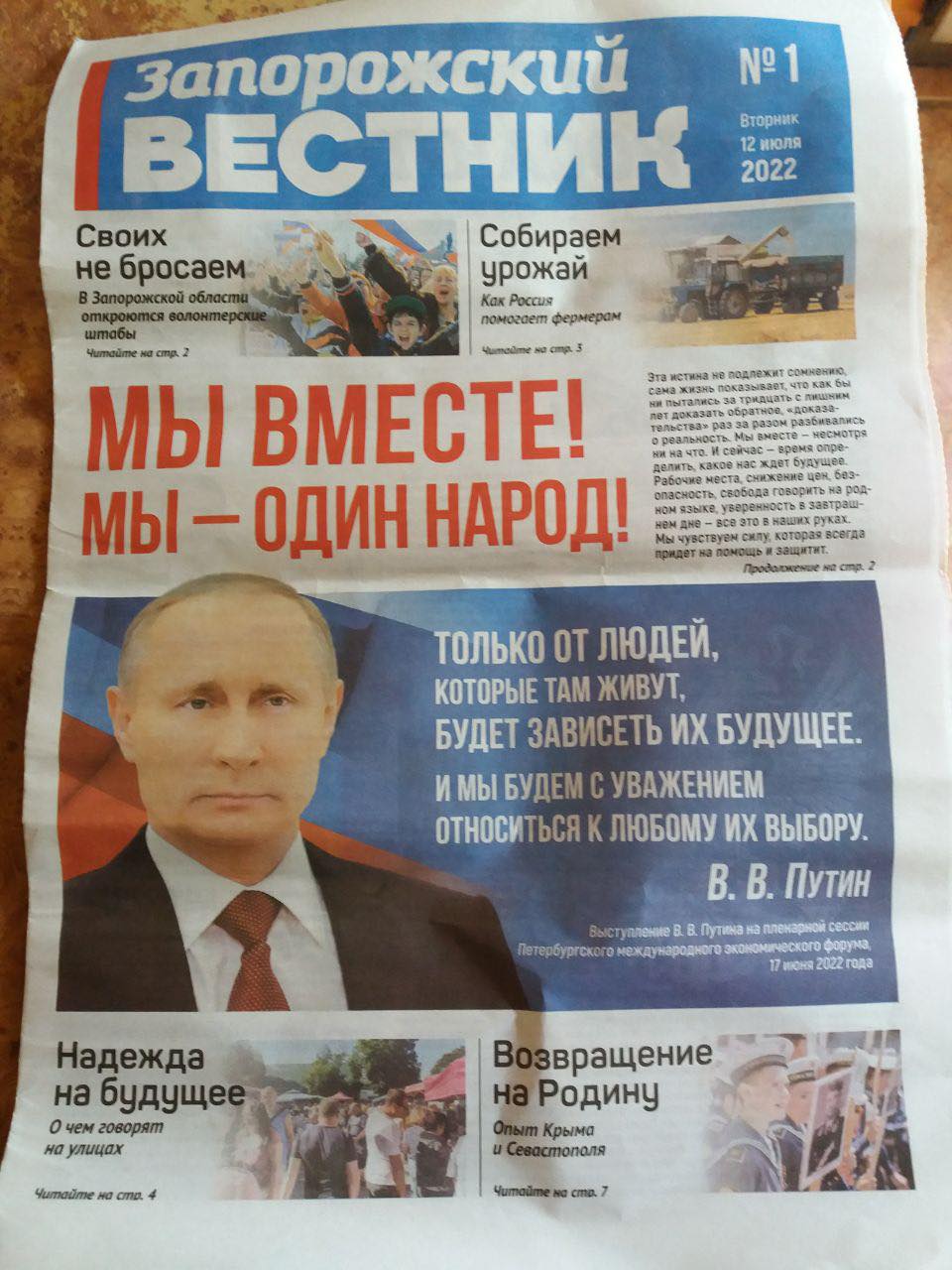 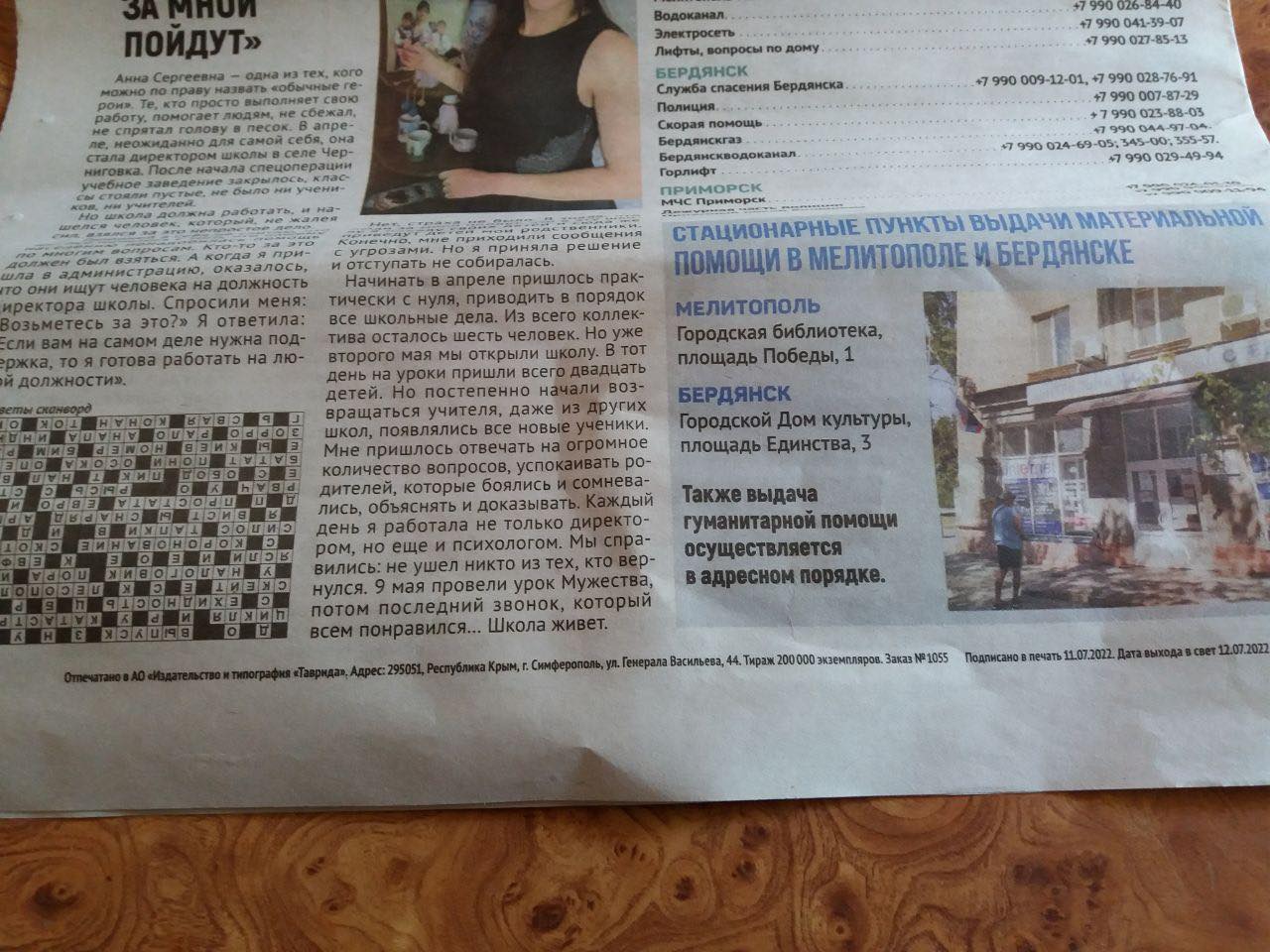 Along with the weekly, the propaganda newspaper "Komsomolska Pravda" is now being distributed in the occupied territories. This became known on July 16 from a Telegram post on the channel of the collaborator Volodymyr Rogov, where he writes that "in the liberated territory of our region, the printing of a special issue of Komsomolskaya Pravda and, earlier, of Zaporozhsky Vestnik has begun."

The photos that the collaborators post online include no pages where, as a rule, the newspapers' source data would be indicated. As IMI managed to find out, "Zaporozhsky Vestnik" in particular is being printed at JSC "Tavrida Publishing House and Typography," which is located in Simferopol at General Vasiliev St., 44, which contradicts the collaborators' claims about the media being published in the occupied territories.

Also, on July 17, the Melitopol occupation authorities announced on their Telegram channel that a new edition of another newspaper, "Tavricheskiy Vestnik," was being printed. We are currently investigating the source of this newspaper as well.

We will remind you that there were several printing houses in Zaporizhzhia region, one of them is located in the city of Melitopol and belongs to the media holding "Melitopolski Vidomosti" (MV holding), which included several printed and online media outlets. At the beginning of the occupation, the head and journalists of the publication were kidnapped by the russian military. Later, they were fired, and the holding, together with the printing house, ceased operations.