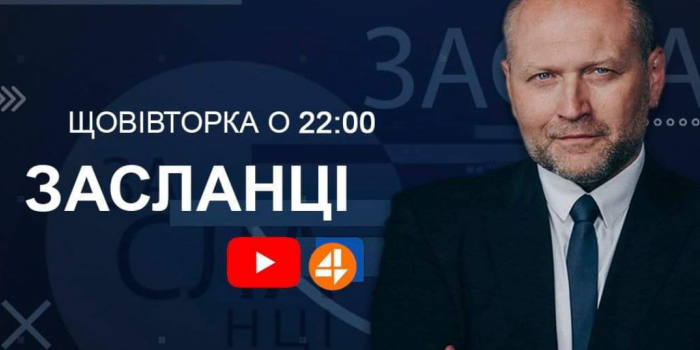 Former MP Boryslav Bereza said that the management of Kanal 4 took off the air his investigative program "Exiles", without warning. Bereza told it on his Facebook page, as Detektor Media reported.

“The broadcast of my author's program "Exiles" on Kanal 4 which was announced yesterday about the Zelensky scheme of launching national air carrier did not happen yesterday. Without warning and intelligible explanation, the new management of the channel blocked the investigation and silently took the program off the air, " as Boryslav Bereza wrote.

According to the host, a week earlier the channel's management cut a fragment from his program about how Oleksiy Kovalyov, a MP from the Servants of the People, bought  Kanal 4.

"The latent conflict began a week ago, when the channel's management decided to censor my program on build-out by Zelensky's of the media empire. In the version that was aired on the Kanal 4, a fragment was cut out about the acquisition of this TV channel by the same "servant of the people" Kovalyov. We refused to cringe to the new owner, and my program "Exiles" on YouTube released the full version, uncut. And I asked to be officially explained why an excerpt was cut off from the program without my consent? The answer is silence, ” as Bereza added.

In his opinion, the Office of the President is allegedly trying to remove Volodymyr Zelensky's criticism from the channel. In response, Borislav Bereza decided to quit his job on Kanal 4.

"Now, together with a group of journalists, I am suspending cooperation with the channel that practices cencorship and banning independent investigations about the government. We are looking for a new place to record and to release the program”, he added.

The owner of the Kanal 4 Oleksiy Kovalyov, in turn , said that Bereza's program was taken off the air because lawyers, according to him, found some inaccurate information in it.

“News about the provocative program of Boryslav Bereza, which was to be aired on our channel, are circulating in the media. After reviewing the content, the lawyers assured that the facts set out in the program are untrue and aimed at discrediting public authorities and destabilizing the situation in the country. For these reasons, this program was taken off the air. Our goal is to tell the truth, not to multiply fake news, ” as the MP wrote on Facebook.

Media Detector asked Kovalev to comment on whether such pre-broadcast content checks apply to all programs, whether journalists have been warned about it, and whether the channel's owner considers it censorship and interference in editorial policy, and is waiting for a response.

As IMI reported, on January 11, the new owner of Channel 4, MP from "Servants of the People" Oleksiy Kovalyov announced the termination of cooperation with host Ostap Drozdov.

"Any provocations that split or shake the unity of the Ukrainian people are unacceptable. As well as incitement to hatred, discrimination or xenophobia, "Kovalyov wrote.

Ostap Drozdov said that the termination of cooperation with Kanal 4 after the change of ownership was a matter of time: “There is nothing strange in this, my opposition rhetoric clearly does not fit into the propaganda format of the pro-government media, this was a matter of time ”.

At the end of December 2021, it became known that the People's Deputy from the "Servant of the People" Oleksii Kovalyov bought Kanal 4 from former MP Dmytro  Dobrodomov.

Oleksiy Kovalyov said that his family decided to buy Kanal 4 to "make it even better, more powerful and more popular."