Freedom of Speech Barometer for June 2021

In June, experts from the Institute of Mass Information recorded eight violations of freedom of speech in Ukraine. This is the lowest number of violations detected by IMI since the beginning of the year.

Of the eight violations, seven were incidents of physical aggression against journalists.

Four cases of obstructions were recorded: two denial of access for journalists to the Odessa Regional Council; in Kyiv, journalist Alina Kondratenko who was denied access to the Sviatoshynskyi District Court due to an order “On the Implementation of Anti-Epidemic Measures,” which restricts journalists' access to hearings; near Kharkiv, a person involved in a road accident hampered a journalist to take video recording. 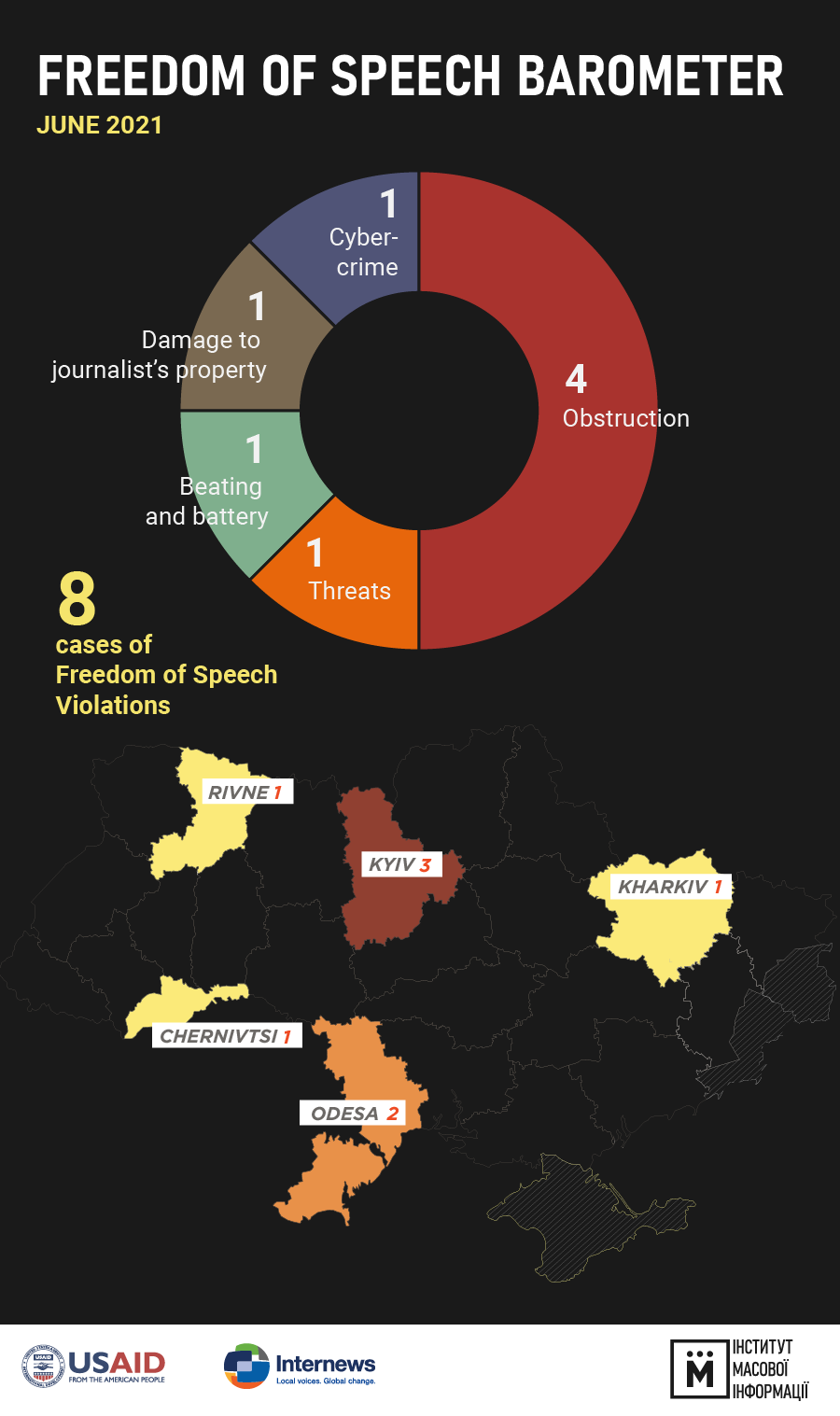 Thus, the Rivne site "Fourth Estate" was cyberattacked. Volodymyr Torbich, the editor of the “Fourth Estate”, related the attack to an investigation into the eventual illegal enrichment of a local deputy.

In Chernivtsi, IMI recorded a case of property damage: the producer of the Chernivtsi branch of the Suspilne Broadcaster (UA:PBC) Maksym Voloshin had his car brakes cut. This is a very serious case, as there was, in fact, murderous attack. Voloshin considers that this case could be related to his professional activity. However, he did not receive any direct threats or accusations.

In total, violations were recorded in five regions of Ukraine. At the top there are Kyiv (three cases) and Odessa (two), then one case each in Rivne, Chernivtsi and Kharkiv region.

This June, the judiciary and local authorities, as well as individuals violated freedom of speech.

In all, five men journalists and one female journalist suffered from prejudice to their rights this month.

Thus, since the beginning of the year, IMI has recorded a total of 97 cases of violations of freedom of speech, 55 cases of obstruction, 10 restrictions on access to information, nine beatings and six threats.

* The Institute of Mass Information conducts monthly all-Ukrainian monitoring of freedom of speech in the following categories: physical aggression, censorship and access to information, economic and political pressure, legal pressure and cybercrime against the media and journalists. Only cases related to freedom of speech and professional journalism are included in the monthly report. You can read more about the methodology here.