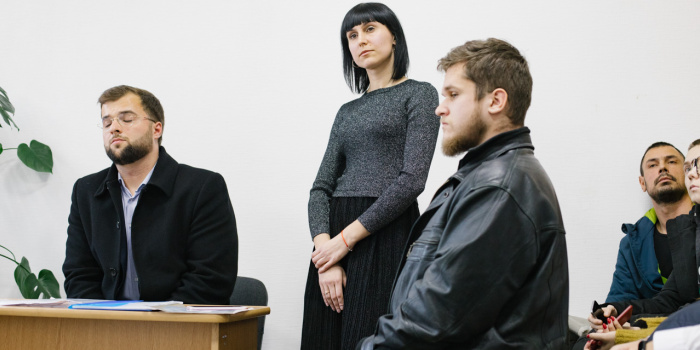 In particular, the appellate court completely rejected Magdenko's claims to indemnify her pecuniary and non-pecuniary damages)

In addition, the court decided to recover from the plaintiff Magdenko in favor of Andriy Kachor court costs in the case of 4610 hryvnias 40 kopecks (around $ 164). We will remind, the plaintiff had demanded from Andrey Kachor to indemnify her the total amount of about 83 thousand hryvnias (around $2 959).

In its ruling, the appellate court noted, inter alia, that the previous court decision "did not correspond to the actual circumstances of the case, the court did not fully clarify the circumstances relevant to the case and incorrectly applied substantive law."

In general, the Court of Appeal ruled that the information published in Andriy Kachor's editorial column "Russians are coming," or "Who and why does assault “Vezha” were evaluative judgments, so it could not be refuted and did not need to be proven and did not cause any prejudice to pecuniary or non-pecuniary rights of the plaintiff.

The court also found that the information published by Kachor "in no way concerns the personal or family life of the plaintiff, but contains only criticism of her activities as a member of a political party."

As IMI reported, on October 1, 2020, the Vinnytsia City Court ordered the editor-in-chief of the Vezha publication, Andriy Kachor, to refute the report about the head of the Vinnytsia regional branch of the Shariy’s party, Svitlana Magdenko.

In particular, the court ordered Kachor to refute the information that Magdenko passed the tips to the pro-Russian blogger Anatoly Shariy, about which kindergarten the journalist's son goes to.

On July 11, 2019,  the editor-in-chief of the Vinnytsia news portal "Vezha" Andriy Kachor said that supporters of the pro-Russian video blogger Anatoly Shariy threatened him and his family. As to him, this was due to the publication on July 8 on “Vezha” of the news about the burning of unknown local activists  of the campaign materials of the party of Shariy..

The threats began after the news of the burning of Shari’s party campaign hand-outs by unknown Vinnytsia activists was published on the website on July 8 .

A few hours after the publication, Shariy posted a 15-minute film on YouTube about Kachor, his wife and son, in which he threatened and insulted the journalist's family. Over the next few hours, Kachor and his family, as well as Vezha journalists, received hundreds of threats of physical violence from Ukraine, Russia, ORDLO, and the Crimea.

An employee of a kindergarten attended by Kachor's son also joined the harassment. According to the journalist, under Shariy's letter, she told which kindergarten the child goes to, detailing its location.

On July 12, 2019, the investigation of the Vinnytsia Police Department initiated criminal proceedings under Art. 345 (1) of the Criminal Code of Ukraine (“Threat or violence against a journalist”) on the fact of threats against the editor-in-chief of the online publication “Vezha”.

On October 2, 2020, the Vinnytsia City Court sentenced Artem Artmenko, a resident of Vinnytsia Region, to two years of suspended imprisonment on charges of assaulting the editor-in-chief of Vezha, Andriy Kachor.