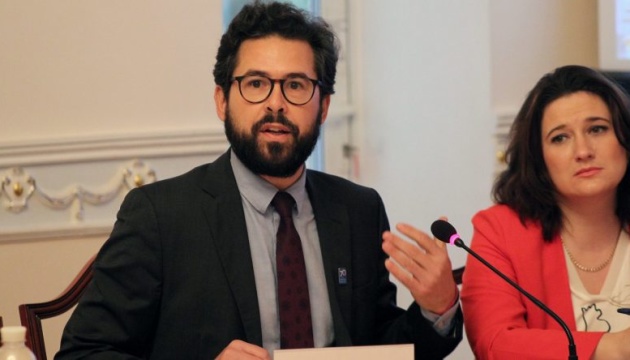 The United Nations Human Rights Monitoring Mission in Ukraine (UNHR) named impunity of those who have committed crimes against the press professionals as the main threat to safety of the journalists in Ukraine.

On October 16, Benjamin Moreau, Deputy Head of the United Nations Human Rights Monitoring Mission in Ukraine, told it at a sitting of the parliamentary Committee on Freedom of Speech, as Ukrinform reported.

“In all our reports, we are constantly mentioning that the main threat to safety is impunity of offenders for the crimes they had committed previously. We constantly emphasize that until those offenders enjoy impunity for the crimes they had committed previously, it is impossible to provide a safe environment for the press. So, we urge the MPs and the committee members to publicly condemn the impunity of the criminals, ” Benjamin Moreau said.

He also recalled the murders of journalists Vadym Komarov and Pavel Sheremet, which no one has ever been prosecuted for.

Benjamin Moreau added that the UNHR Monitoring Mission in Ukraine insisted on continuing the practice of setting up temporary investigative committees probing into attacks against the journalists, as it was the case in the murder of Kherson activist Kateryna Gandzyuk.

"The second aspect we are concerned with is the inaction of law enforcement agencies as to incidents of assaults," Benjamin Moreau said. At the same time, he cited the example of a breakdown by young men at a press conference in Ukrinform on July 30.

As IMI reported, on July 30 the Ukrinform press conference on votes counting was disrupted by a group of far right activists. Three employees of the news agency got injured and one of them was sent to the hospital.