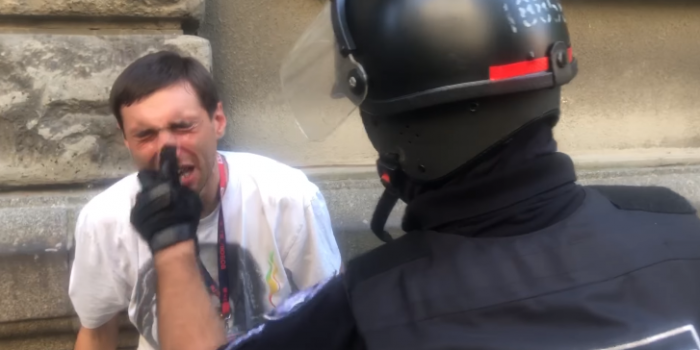 Police provide assistance to Anton Pilipp. SCreenshot from the video

TSN cameraman Anton Filipp was injured during a rally near the President's Office on August 14, as 1+1 Media group reported.

During the clash between activists and police, the operator was knocked off his feet and perfused with tear gas.

On August 15, his condition got worsened, doctors also suspect brain concussion. In addition, Anton was diagnosed with burns to the eyes and nasal cavity, which was caused by tear gas sprayed into the crowd.

"According to the victim, the attack on him occured after some activists identified the symbols of the 1 + 1 TV channel on filming equipment and hostile appeals to the employee of the media holding," the press service reported.

The media group filed a complaint with the police requesting to open proceedings under Art. 171 (obstruction of journalists) and Article 345-1 (threat or violence against a journalist) of the Criminal Code of Ukraine.

As IMI reported, On Saturday, August 14, in the center of Kyiv, some unknown persons severely beat Oleksander Kuzhelny, a photo correspondent for the Bukvy newspaper, as Bukvy reported, as well as this was confirmed by his colleagues.

During the rally, as Oleksander Kuzhelny said, an unknown man wearing balaclava approached him, asked what he was doing there, an  speaking aggressively told him to leave. When the correspondent decided to leave the place, a group of people caught up with him and  demanded to delete the photos he had taken. Then they attacked the reporter.

Kyiv police investigators served the suspicion notes to two people who beat Oleksander Kuzhelny, other involved in are wanted.