Suspicion notes served to two assailants of Bukvy reporter. Other on wanted list 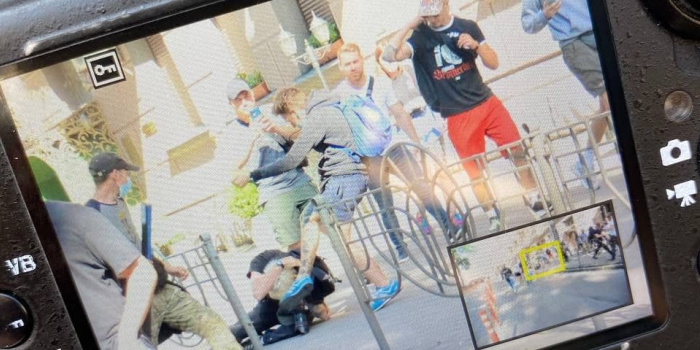 Kyiv police investigators served the suspicion notes to two people who beat Oleksander Kuzhelny, a photojournalist for the Bukvy edition, after a rally in downtown Kyiv on August 14. This was reported by the police press service.

Proceedings were opened for threat or violence against a journalist (Part 2 of Art. 345-1 of the Criminal Code), the case is under procedural control of the Pechersk District Prosecutor's Office of Kyiv.

The assailants were found out to be Lviv residents, born in 2001 and 2004, who took part in the the rally.

"The police appealed to the court with a request to take precautionary measures. The defendants face up to five years in prison for the crime. Police officers are also establishing the role of other participants in the crime, ” the statement reads.

As Bukvy reported , the attackers apologized to Kuzhelny after the incident. They said they aggressed him because of a "false tip".

According to the attackers, they were approached by two unknown young men who said that a #Bukv correspondent allegedly photographed participants in the "Stop the Surrender" action and then "leaked information" to people who threatened nationalists.

"We were simply informed about it. It came not from the ours. And I just bought into that information… There was an information that he was tipping off about nationalist activists. He takes a photo and then he tips off about… The guys approached me at the end of the rally and said that it was you who took the photos and tipped off about them. (Photo) These were the activists who were at the rally, ” an assailant explained.

Kuzhelny reminded that he first showed his press card, and after that he was beaten.

"After I showed my press card, they started beating me. Do you realize this was an attack? ” he asked.

The attackers, aged 18 and 19, respectively, apologized.

"I want to apologize for this incident and my actions… We were just told some false information that you did bad things to our people… So I sincerely apologize for that. If you can forgive, forgive. If you can't forgive, that's your right, ”one of the attackers said.

They were tracked down by the representatives of the National Corps. The guys were traveling by train from Kyiv. According to Bukvy, the leader of "National Corps" Andriy Bieletski convinced them to surrender to the police.

According to the attackers, they are not members of the National Corps and Azov battalion.

Police remind that an apology for a crime is no excuse.

“Repentance, pecuniary compensation for the costs of a journalist's treatment may be taken into account by the court during the sentencing. We also remind you that membership in any public formations or political organizations does not release from responsibility for committing an offense, ”the police said.

According to Nadiya Maksymets, a spokeswoman for the Kyiv City Prosecutor's Office, on Monday, August 16, motions regarding pretrial restraint for the suspects will be sent to the Pechersk District Court.

"According to the investigation, two young men, who were served with the suspicion note, jointly inflicted about 20 blows to the victim with their hands and feet. But they were not the only ones to beat. So while the court chooses pretrial measures for the suspects, the investigation will establish other participants in the beating, ” Nadiya Maksymets wrote.

As IMI reported, on Saturday, August 14, in the center of Kyiv, some unknown persons severely beat Oleksander Kuzhelny, a photo correspondent for the Bukvy newspaper, as Bukvy reported, as well as this was confirmed by his colleagues.

During the rally, as Oleksander Kuzhelny said, an unknown man wearing balaclava approached him, asked what he was doing there, an  speaking aggressively told him to leave.

After this incident, the correspondent decided to be more careful and quickly leave the place after the action was over. However, after the rally, a group of people caught up with him and  demanded to delete the photos he had taken. Then they attacked the reporter.

IMI reported earlier,  on July 21, some persons from right-wing organizations assaulted the journalist for Bukvy online edition Oleksander Kuzhelny. The incident occurred before the courthouse, where they considered the issue of deportation of Belarusian activist Aleksei Bolenkov, Alexander Kuzhelnyy at his Facebook page said that he was hit in the face, they spat in his face, pushed and threatened him.