Traitors can not be honoured: a call on Zelensky to cancel the Honoured Journalist of Ukraine title 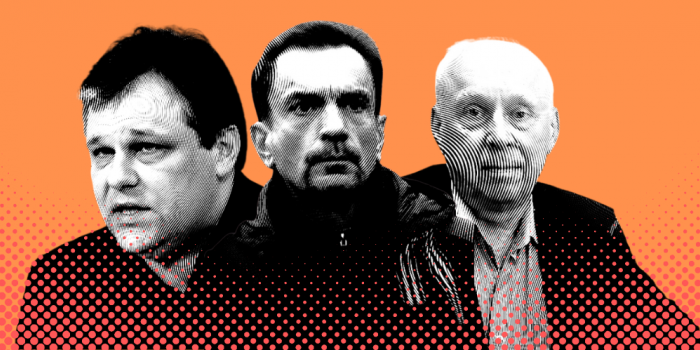 Ukrainian journalists and human rights organizations call on the President of Ukraine Volodymyr Zelensky to revoke the state awards of the journalists who have betrayed Ukraine and have been working in Russia's media propaganda army for years, and to take away the title "Honored Journalist of Ukraine" from them.

Namely, we mean revoking the Honored Journalist of Ukraine title of:

Volodymyr Bezrodny, former First Deputy Head of the Press and Information Department of the Donetsk Regional State Administration, former NUJU member. In 2015, Donetsk regional branch of the NUJU expelled him from its ranks because of his cooperation with the DPR militants.

Leonard Svidovsky, former deputy of the Luhansk Regional Council from the Party of Regions. Has been working for the seized Luhansk Regional Television and Radio Company, which the occupiers renamed LPR STRC, since the occupation of Luhansk. Has expressed support for the aggressor after Russia's large-scale invasion of Ukraine. Also spreads content that discredits the Ukrainian authorities and the Armed Forces of Ukraine on his social media.

These people having such a title diminishes the significance of this award, effectively equating real journalists who are defending Ukraine's independence at the cost of their lives, and persons who have discredited journalism as a profession and are serving in the interest of the Kremlin regime and at its bidding.

They received this title back in 2008 and 2010. However, despite being given it, with the beginning of the Russian aggression in 2014 they sided with the aggressor country and none of them refused the title.

We remind that back in 2017, the prosecutor's office of Luhansk oblast declared Rodion Miroshnyk wanted. He is charged under Part 1 of Art. 109 ("Deliberate actions aimed at aiding the violent overthrow of the constitutional order and seizing state power"), Part 2 of Art. 110 ("Deliberate actions aimed at changing the outline of the territory and the state border of Ukraine in violation of the order established by the Constitution of Ukraine") and Part 1 of Art. 258-3 ("Participation in the activities of a terrorist organization") of the Criminal Code of Ukraine.

In 2020, it was precisely because of Rodion Miroshnyk's appearance on the air that the National Council for Television and Radio Broadcasting assigned an inspection and issued a warning to the Nash TV channel.

In mid-April 2022, Miroshnyk recorded a video from the front line, from the LPR fighters' positions, where he called on the Ukrainian military to lay down their arms while holding a shell in hand.

After Russia's large-scale invasion of Ukraine, the Security Service of Ukraine issued a suspicion notice to Leonard Svidovsky under Part 6 of Article 111-1 of the Criminal Code of Ukraine (cooperating with the aggressor state and its occupying administration to conduct media activities aimed at supporting the aggressor state, its occupying administration, or armed formations, and/or it avoiding responsibility for its armed aggression against Ukraine).

It should be noted that none of them have renounced this title on their own, on the contrary, some even emphasize belonging to the Ukrainian community and indicate the title among other regalia. For example, Russian resource news-front.info presents Volodymyr Bezrodny as an Honored Journalist of Ukraine, a Ukrainian associate professor of the Department of Journalism.

We call to cease the practice of awarding the title "Honored Journalist of Ukraine" and to initiate appropriate changes to the legislation.

We remind you that over a year ago, on June 2, 2021, the Council for Freedom of Speech and Protection of Journalists under the President of Ukraine recommended the head of state to cease giving the title "Honored Journalist of Ukraine," as well as to initiate relevant changes to the Law "On State Awards of Ukraine."

The Council's initiative was supported by several media and human rights organizations on June 3. "By awarding journalists with such a title, even with the purest intentions in mind, the state undermines the independence of the media and the trust in journalism as such. After all, at the end of the day, it is the target of criticism trying to flatter the critic. We are convinced that the highest reward from the state is not an award, but open and accessible information, transparency and accountability of the authorities, and above all – safety and protection of journalists, quick and professional investigation of crimes, and fair punishment of the perpetrators," said the civil society representatives.