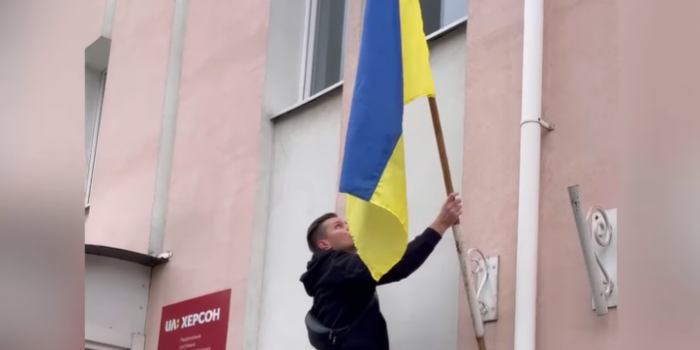 Photo: screenshot from the video posted on Mykhailo Svarychevsky's Facebook

He bought the flag in Odesa for this occasion especially. Mykhailo spoke about this in his comment to an IMI representative.

"It was the idea that got me through the enitre occupation. I knew that in the first days, when the city is liberated and there is a real opportunity to get there, we must do it. The opportunity arose, and we did it right away," said Svarychevsky.

According to him, pyrotechnicians examined the branch's building and found no explosives there. So he went there with his colleagues and inspected the state in which the occupiers had left the area and the building.

Mykhailo Svarychevsky noted that the branch is in an even worse condition on the inside. The Russians had stolen nearly everything. Only old furniture (some tables, some chairs) and the old safes, which the occupiers were simply unable to lift, were left. The invaders had left their garbage and waste behind.

As for the equipment, there were some decommissioned units that did not work and had been stored in warehouses.

"Russians being Russians. That is to say, we were ready for this," noted Mykhailo.

He added that they would start with temporarily boarding up the branch's windows with some wood; later, they would invite pyrotechnicians for an additional inspection, because the territory is quite large and needs to be examined once more.

In addition, the branch employees have an investigation ahead of them, because they will need to make a list of the property that has been stolen, damaged, or destroyed by the Russian occupiers.

"We will not be able to work there until the investigators are done. It is also a whole procedure, and it is unclear how long it will take," said Mykhailo Svarychevsky.

Resuming work in Kherson is also a matter of safety, seeing as the Russians are shelling the city.

On May 11, the collaborators announced that the TV and radio company "Tavria" will start broadcasting in the region.

On May 16, Suspilne announced that the Russian military had looted the Suspilne Kherson branch and was using it as a basis to create a propaganda channel.

The building of Suspilne's Kherson branch was captured by the Russian military as soon as they entered the city. They set up one of their headquarters there. The equipment was taken away, the offices were "turned upside down", military equipment was stacked in the branch's courtyard, reported Suspilne correspondents.

On November 12, 2022, while retreatig from Kherson to the left bank of the Dnipro, the Russian occupiers blew up a TV tower.