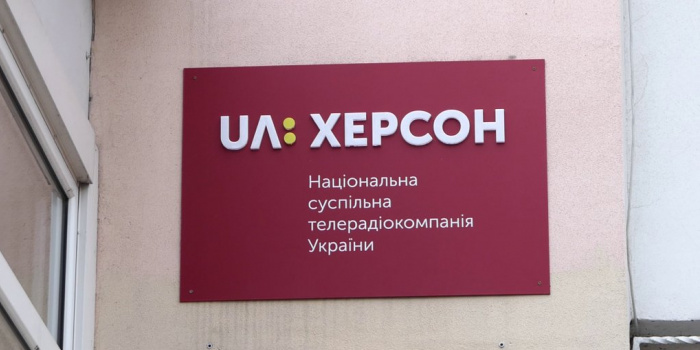 The russian troops robbed the Kherson branch of Suspilne and are now setting up a propaganda channel, Suspilnе reports.

The building of the "Suspilne Kherson" branch had been seized by the russian military as soon as they entered the city. They set up one of their headquarters there. The equipment was taken out, the offices were "turned upside down," and in the branch's yard there is a pile of military equipment, Suspilne correspondents say.

Currently, there is not a single TV camera or a screen in the studio from which Suspilne Kherson used to broadcast, and the russian military has taken out absolutely all computers and any equipment worthy of a looter's attention from the employees' offices. All that is left is old and long-decommissioned equipment. russian propagandists used it to film the so-called "investigation" into the "temple of Ukrainian lies and propaganda," as they called the Suspilne Kherson branch.

"Destruction and looting are apt words to describe the consequences of the occupation of the branch, which began on March 2. The video shows old and decommissioned equipment that had been stored in the basement, as well as the studio being used as a warehouse. But somehow all the new technology and equipment didn't make it into the video, because, most likely, they were taken to russia," the branch's manager Mykhailo Svarychevskyy wrote in his Facebook post.

In addition to looting accusations, "Media Guards" shows "stories" about the Territorial Defense Forces of Kherson living in Suspilne's basement and ATO veterans working at the branch, and shows photos of Suspilne employees from the files stored at the military registration and enlistment office. Among those, there are people who no longer work for the branch, as well as those who have already passed away.

"It is not surprising to see military IDs in the video, because the military registration and enlistment office building has been seized from the very first days of the occupation. We treat the military with pride, honor and respect. Their presence among the staff is a common thing, and a result of the parties' bilateral decision," said Mykhailo Svarichevsky.

He also adds that if the territorial defense forces needed a place to use, there would be no objections.

"This whole so-called 'investigation' is a complete fake. From the personal files of tens of thousands of people that the 'investigators' allegedly found at the office to the equipment being stolen by the branch's employees. First of all, why didn't they show at least one file? Second of all, multiple residents of Kherson saw the russian troops approach the branch on trucks from Perekopska Street and take out the equipment," Suspilne employees said.

The investigation was based on the accusation that "Suspilne Kherson" was promoting of all things Ukrainian and inciting hatred for russians and their supporters. As an example, the so-called "journalist" demonstrated books that were allegedly found at the branch, such as Leonid Kuchma's "Ukraine Is Not Russia" and anthologies on the OUN history, the crimes of the russian government, and so on.

"It is very good that the orc knows where to get such literature in the Kherson region. Read carefully! The books describe very well what happened to those who tried to seize Ukrainian land. The russian ideology is an argument-less verbal diarrhea!" wrote the branch manager.

On May 11, the collaborators announced that the Tavria Television and Radio Company would start broadcasting in the region. RIA Novosti reported that the so-called "Deputy Head of the Civil-Military Administration" Kirill Stremousov appealed to the "Head" of Crimea Sergei Aksyonov to help the local television and radio company with staff and equipment. Oleg Kryuchkov, an adviser to the "manager" and general producer of TRC Crimea, said that they were "ready to recruit journalists in Kherson." He clarified that his TV and radio company would provide assistance in setting up the broadcast.

As IMI reported, on March 3 in Kherson the occupiers took over the premises of Suspilne branch, the staff continues to work remotely. Armed men set up trip wires around the building. In addition, the occupiers, who seized the television studio and the TV center, cut off the Ukrainian television signal.