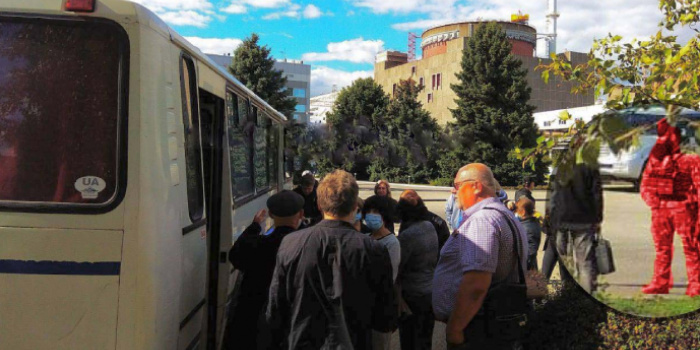 The Russian occupiers brought a crowd of extras to the Zaporizhzhia nuclear power plant to create a picture for the pseudo-referendum. This was reported by the Energoatom press office.

"They staged another show near the Zaporizhzhia NPP, issuing mass invitations for the nuclear plant's staff. A large group of men in civilian clothes waited for the shifts to end at the station and mixed in with the personnel leaving after the shifts. On the way, the frauds were giving interviews to pro-Russian propaganda media and shouted words of support for Russia and the pseudo-referendum, after which they headed to the bus where the 'voting' was being held and demonstratively filled out the ballots," the company's press office said.

Energoatom emphasized: this fact is yet another proof that no one among the patriotic employees of the Zaporizhzhia nuclear power station volunteered to participate in the pseudo-referendum. So propagandists once again had to paint a "good" picture for their Russian audience.

As IMI reported, Verkhovna Rada Commissioner for Human Rights Dmytro Lubinets published a list of the "international observers" who were present at the sham referendum in the occupied territories. It includes a number of media workers, political observers, editors, and journalists. At least that's what they call themselves.