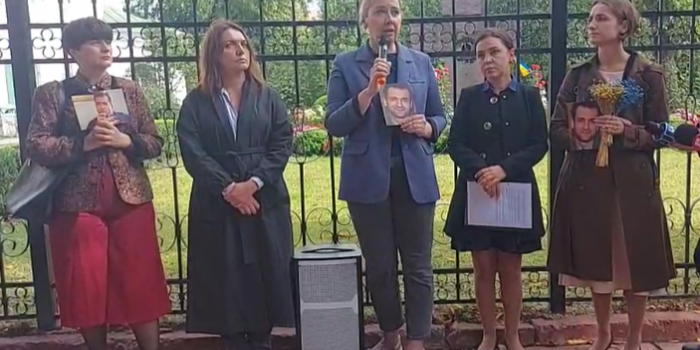 It is crucial that Ukrainian authorities investigate the war crimes committed by Russia against journalists in Ukraine promptly.

This was stressed by the director of the Institute of Mass Information, Oksana Romaniuk, at the event commemorating Heorhiy Gongadze and all murdered Ukrainian journalists.

"Today it is necessary to keep talking not only about investigating the crimes that happened inside the country – there must be a very prompt investigation of the war crimes committed by Russia. Promptness is crucial. It is this promptness that will help establish who committed these crimes and bring them to justice. Our authorities should also refer these cases to the International Tribunal and, where possible, to the International Criminal Court in The Hague. We still hope that a separate international tribunal will be established for this situation, for the crimes of aggression committed by Russia in Ukraine," noted the director of IMI.

Oksana Romaniuk recalled that since the beginning of the full-scale invasion, the Russians had kidnapped 15 journalists. The fate of four remains unknown.

"We hope that they are alive. We know that those who have been abducted were kept in basements, subjected to torture, tortured with electricity, not given water or food. We have information that some of our colleagues are still being kept in basements in the occupied territories. For the sake of their safety, we cannot mention their names, but the torture continues," said the IMI director.

Oksana Romaniuk emphasized: dictatorship needs silence. This is why in the occupied territories there are craters instead of media offices.

"What happened to the Telegazeta office in Kadiivka, Luhansk oblast; how the Vilne Radio office in Bakhmut was completely destroyed; media offices have been destroyed in Mykolaiv, Zaporizhia oblasts. Over 215 local media outlets were forced to close down," Oksana Romaniuk added.

According to her, the Russians have kidnapped not only journalists, but also their family members. In particular, in Zaporizhzhia oblast, the occupiers kidnapped a journalist's father and held him captive in order to put pressure on her.

In total, Oksana Romaniuk reminded, Russia has committed 435 crimes against Ukrainian media since the beginning of the full-scale invasion.