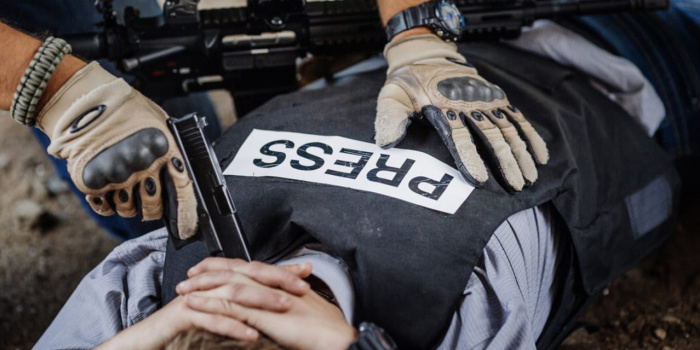 “In 2020, extraordinary damage was inflicted on the practice of free and independent journalism"  This is the message of the special report of the Council of Europe platform on promoting the protection of journalism and the safety of journalists, as Radio Liberty reported. “Ukraine saw a high number of cases of intimidation and harassment of journalists.”

“A total of 201 media freedom alerts were published on the Platform in 2020. That is the highest annual total so far recorded and is almost 40% more than in 2019. A record number of alerts concerned physical attacks (52 reported cases), and harassment or intimidation (70 cases).(…) During the past year the culture of impunity grew more entrenched in parts of Europe.(…) Impunity has deadly consequences by signaling that the perpetrators of serious crimes can escape unpunished. It can encourage further acts of violence against journalists”, the report reads.

By the end of 2020, 33 alerts on impunity had been filed with the Platform. Of the 33 cases, 24 alerts concerned impunity for the murders of journalists in Azerbaijan, Malta, Montenegro, the Russian Federation, Serbia, Slovakia, Turkey, Ukraine and the United Kingdom (see the list of cases at the end of this section). The Russian Federation, Turkey and Ukraine account for two-thirds of the alerts in this category

The partner organisations welcome the fact that Ukraine’s Office of the Prosecutor General is conducting a reinvestigation of the case of Georgy Gongadze, following the Committee of Ministers’ decision on the implementation of the European Court judgment in December 2020.75 We urge the authorities to ensure that the investigation is thorough and independent so that it can effectively identify and prosecute those behind his killing. We call for exhaustive investigations to take place into the killing of Vadym Komarov, which looks set to become yet another case of impunity.76 Finally, in light of new evidence of the Belarusian KGB’s possible involvement in the murder of Pavel Sheremet, we urge the Ukrainian authorities to undertake a fresh investigation into the circumstances surrounding his murder.7

Reports on Ukraine (some of them - ed.) referred to cases when journalists or other media representatives were secretly monitored, their phones tapped or interrogated. “Several alerts shed light on the surveillance of individual journalists and violations of their privacy. Alerts on Ukraine relate to cases where journalists or other media actors have been targeted by covert surveillance, phone tapping or interrogation. In one instance, judges illegally tried to gain access to a journalist’s telephone”, the report reads.

The footnote to this section of the report clarifies: The Council of Europe refers to the case of Scheme journalist Mykhaylo Tkach, who found traces of surveillance devices in his apartment. “Alerts “Judges illegally tried to gain access to a Ukrainian journalist telephone”, posted 4 August 2020; “Ukrainian investigative journalist Mykhailo Tkach finds traces of surveillance devices at his home”, posted 12 August 2020.”

In addition, Ukrainian journalists have faced violations of their professional rights through coverage of issues related to the COVID-19 pandemic, the Council of Europe noted.

As IMI reported, on April 28, the Council of Europe calls on the Ukrainian authorities to take into account evidence of eventual involvement of the KGB in Belarus while investigating into the murder of journalist Pavel Sheremet. This is said in the report for 2021 of the Platform of the Council of Europe for the Protection of Journalism and the Safety of Journalists,

In 2020, IMI recorded 229 cases of violations of freedom of speech were recorded by IMI experts in Ukraine (as of December 28 ). Of these, 171 cases involved physical aggression against journalists.

In the first quarter of 2021, the IMI experts recorded in Ukraine 50 cases of violations of freedom of speech. Of these, 36 were facts of physical aggression targeting the journalists.