In the first quarter of 2021, IMI experts recorded 50 cases of violations of freedom of speech in Ukraine. Of these, 36 concerned physical aggression against journalists.

For comparison: during the same period last year, 62 cases of violations of freedom of speech were recorded, and it was also mostly physical aggression (43).

These are the data of the monthly monitoring of the Institute of Mass Information "Freedom of Speech Barometer". *

The highest number of violations in the first quarter of this year was recorded in the category of “obstruction of legitimate journalistic activity”: 23 (less than it was for the same period last year, when 31 obstacles were recorded). At the same time, compared to 2020, the number of beatings has increased. Seven cases of beatings of journalists were recorded by IMI this year (compared to last year, six cases last year for the same period).

According to IMI experts, the key trends in the field of freedom of speech this year are physical aggression and closed nature of local and judicial authorities. 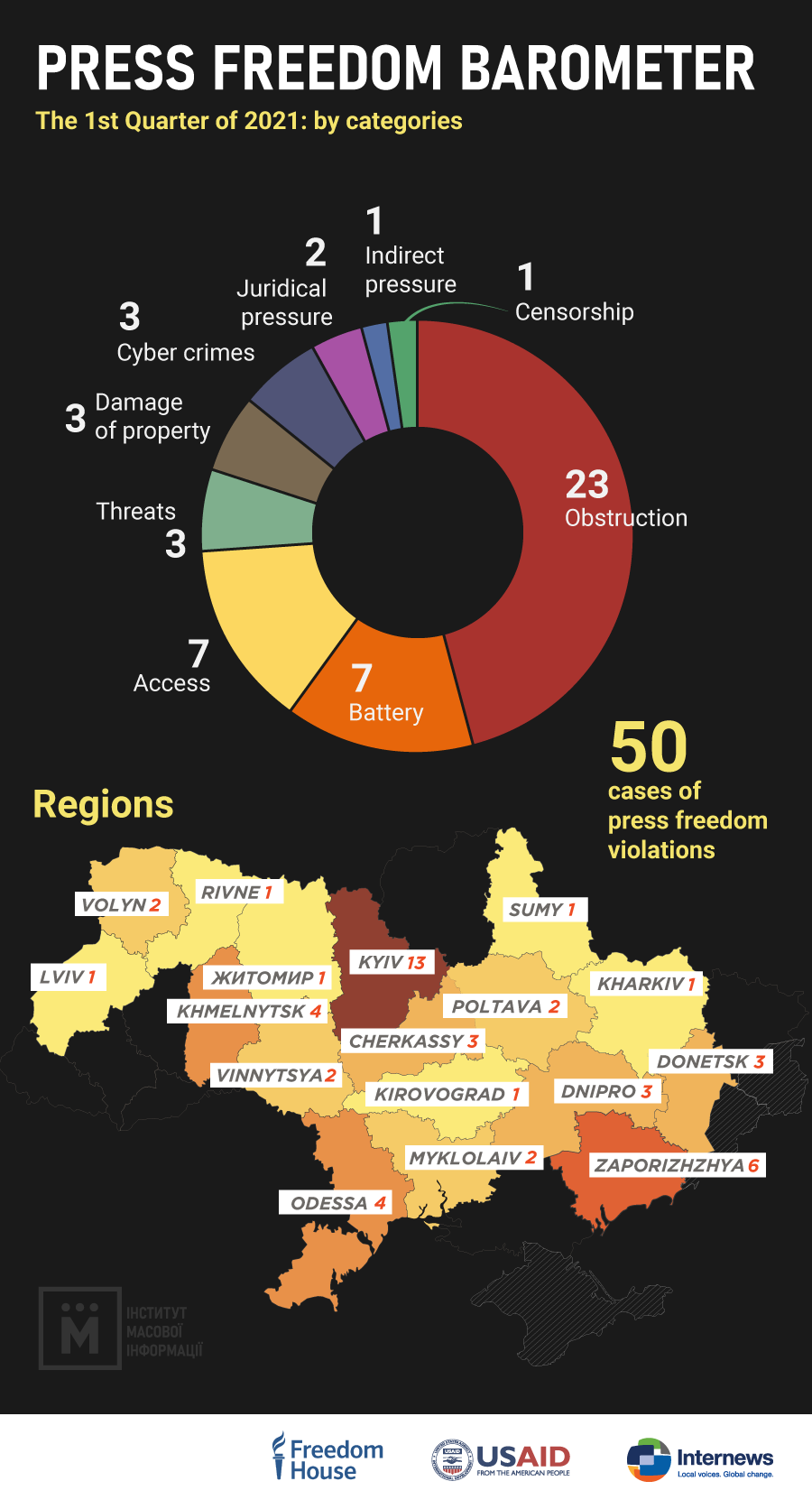 On February there were frequent incidents of injuries of journalists (five people were injured). Journalists suffered from bite, battery and got craniocerebral trauma, their fingers were broken, journalists got scratches and bruises, and there were injuries to their legs. Journalists suffered injuries mainly when they were searching for informations, for example, during inspections of food establishments, during a report on excise-free trade in cigarettes, while trying to record violations of quarantine requirements.

On March, some representatives of the judiciary were "distinguished tehmselves" by illegally denying access for journalists to public hearings. This was especially true of high-profile cases, which are the subject of increased public interest. Thus, in March, IMI recorded four cases of non-admission of the press to court hearings, in particular, of the Pechersk and Darnytsia district courts of Kyiv.

In addition, since the beginning of the year, IMI has recorded seven cases of restriction of access to public information (last year - four cases).

There were also three cases of threats, damage to journalists' property and cybercrime, two cases of legal pressure, and one case of indirect pressure and censorship.

In the first quarter, journalists' right to a profession was most often violated by local authorities, individuals and the judiciary.

In total, violations of freedom of speech occurred in 17 regions of Ukraine. Traditionally, according to IMI monitoring, Kyiv and the region lead in the number of such violations (13 cases). Zaporizhzhya took the second place in terms of the number of violations (six cases) and Odesa and Khmelnytsky regions took the third place (four cases each).

During the first quarter of 2021, there were 22 journalists who faced prejudice to their rights.

This study was made possible by the support of the American people through the USAID Media Program in Ukraine project, run by the international organization Internews Network in partnership with the international organization Freedom House. The content is under the sole responsibility of the Institute of Mass Information and do not necessarily reflect the views of USAID, the US Government or the Internews Network.