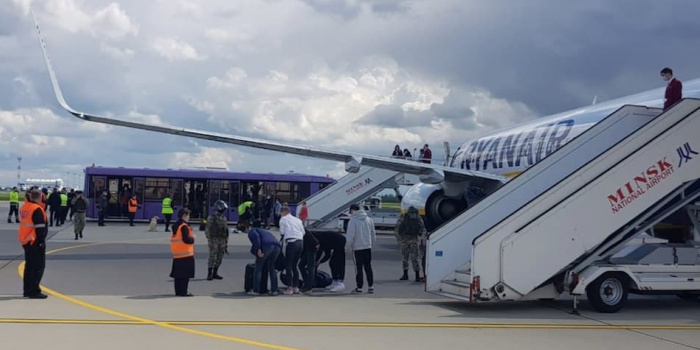 The Office of the Ukrainian President found forced landing of a Ryanair plane in Belarus to be an international terrorism. The incident requires a rigorous legal assessment.

This was said by the adviser to the head of the President's Office for Crisis Communications Mykhaylo Podoliak, as RBC-Ukraine reported.

"The on board incident in Belarus involving the plane flying from Athens to Vilnius is undoubtedly an outright manifestation of international terrorism. And this incident shall be interpreted unequivocally. Forcing a passenger plane to land in Minsk under the trumped-up pretext of a "bomb threat" and escorted by the military aircraft is an absolute and blatant challenge to the today’s world, "as Podoliak said.

Mykhaylo Podolyak said, it was also evident that this act the current Belarusian authorities made needed to be rigorously legally evaluated. At the very least, it can result in a ban on overflights, the isolation of the country from direct communication with the civilized world. Preferably, the direct personal sanctions against the authors of this scenario, as the adviser to the head of the OP added.

“It is clear that official Minsk is indifferent to its own reputation, and so there are not many means of influence: only isolation and only substantial financial and trade restrictions. It is also clear that if such an incident with the forcible coercion of a foreign passenger airliner to land without good reason occurred in a free country, the effects would be much more severe. Up to expulsion from adequate interstate communication, " as Podoliak says.

Another important aspect of this story, as he noted, was that since now, Lukashenko himself and Belarus in general have finally found out to get the category of maximum toxicity and political undersirability.

Roman Protasevych was detained on May 23. He was a passenger on the Athens-Vilnius flight, which landed in Minsk due to a report of a bomb threat. Belarusian police arrested him. Ryanair has received instructions from Belarusian air traffic controllers to land the plane in Minsk. By Lukashenko’s order a MiG-29 military fighter was lifted into the sky to escort the plane.

Earlier, the State Security Committee of Belarus included the founders of the Nexta telegram channel Stepan Putylo and Roman Protasevich to the list of persons involved in terrorist activities, along with Islamic state leaders and other international terrorists.

On November 16, 2020, Belarus sent a note to the Polish counterparts with a demand to extradite the founders of the telegram channel "Nexta" Stepan Putylo and Roman Protasevich.

On November 5, 2020, the Investigative Committee charged them of organizing mass riots in the country.

On October 20, 2020, the Central District Court of Minsk recognized the Nexta Live telegram channel and the Nexta logo as extremist materials.

The telegram channel Nexta Live, which covers the protests in Belarus, changed its name to "Nekhta-Live" after a Minsk court recognized his logo as "extremist material."

Earlier, the Ministry of Internal Affairs of Belarus opened proceedings against Stepan Putyl, and put him on wanted list. He faces up to 15 years in prison. Putyla is accused of organizing mass riots.

In August 2020, the Ministry of Internal Affairs of Russia put on wanted list Stepan Putylo.

The Nexta Live telegram channel became the main source of information about the protests in Belarus.