Police beat Apostroph journalist in Kyiv in a clash 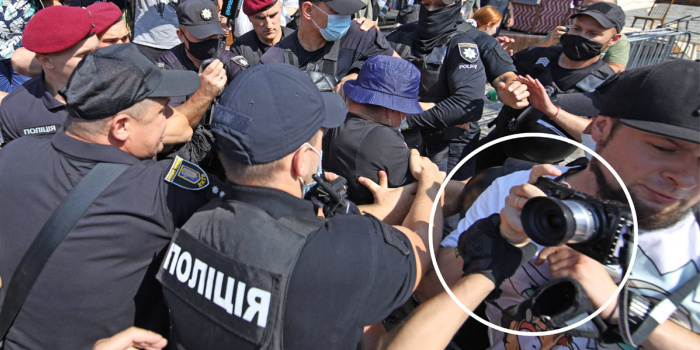 During the mass detention of protesters on the Alley of Heroes of the Heavenly Hundred in the center of Kyiv, Roman Petushkov, photojournalist with Apostroph, was hurt. This was reported on the website "Apostrophe" .

According to Roman Petushkov, when the detentions began, he photographed the structures dismantled by activists, installed as part of a "Soviet" installation dedicated to the 30th anniversary of Ukraine's independence.

The journalist said that the police had the command to "detain everyone" and he found himself between the fence and law enforcement officers. Roman tried to leave the place where the detentions could have started, but it was a turmoil.

One of the policemen grabbed the correspondent from behind and started dragging him toward a group of cops. He felt blows to his back, kidneys and legs, so he started shouting that he was a journalist.

"In front of me, an man with no identification marks tried to grab me, giving orders to the police. After the third time, I shouted that I was the press, I was released," Roman said.

He added that he was generally in good health, but said police officers had incommensurately employed force. "No one introduced himself, did not warned of eventual detention, used brutal physical violence against the detainees, including those who were lying down," Roman Petushkov said.

As IMI reported, on July 30, a police officer twice sprayed Roman Petushkov, correspondent of Apostrophe, with tear gas from a gas canister. The journalist was aggressed during riots between anti-LGBT and security forces on Bankova Street.

Also, on August 17th, several dozens of photojournalists gathered under the Ministry of Internal Affairs demanding to probe in crimes against journalists. The reason for the action was the attack on Bukv photo correspondent Oleksander Kuzhelny, which occured on August 14 in the center of Kyiv immediately after the action near the President's Office.