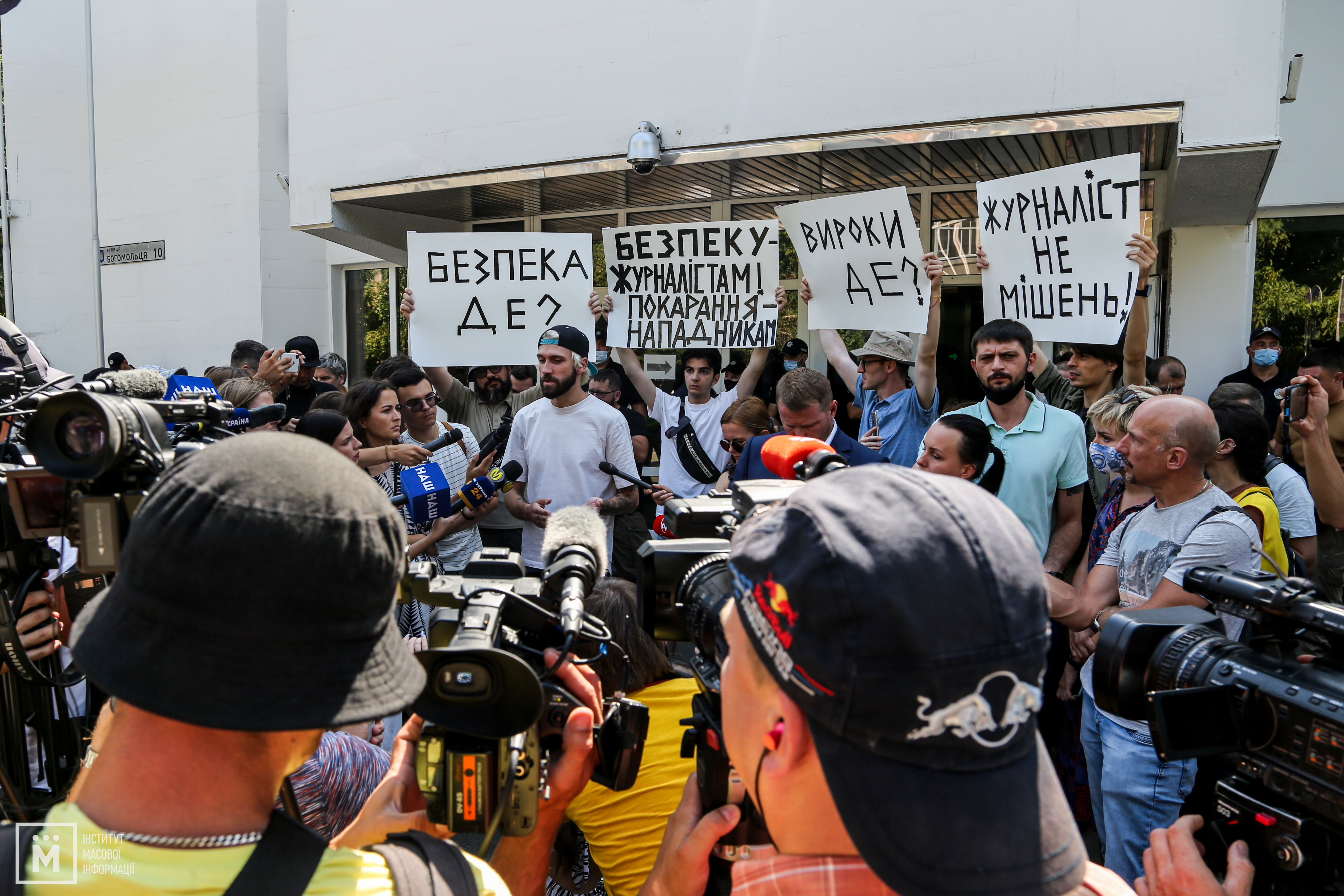 On Tuesday, August 17, several dozens of photojournalists gathered under the Ministry of Internal Affairs demanding to probe in crimes against journalists. The reason for the action was the attack on Bukv photo correspondent Oleksander Kuzhelny, which occured on August 14 in the center of Kyiv immediately after the action near the President's Office. 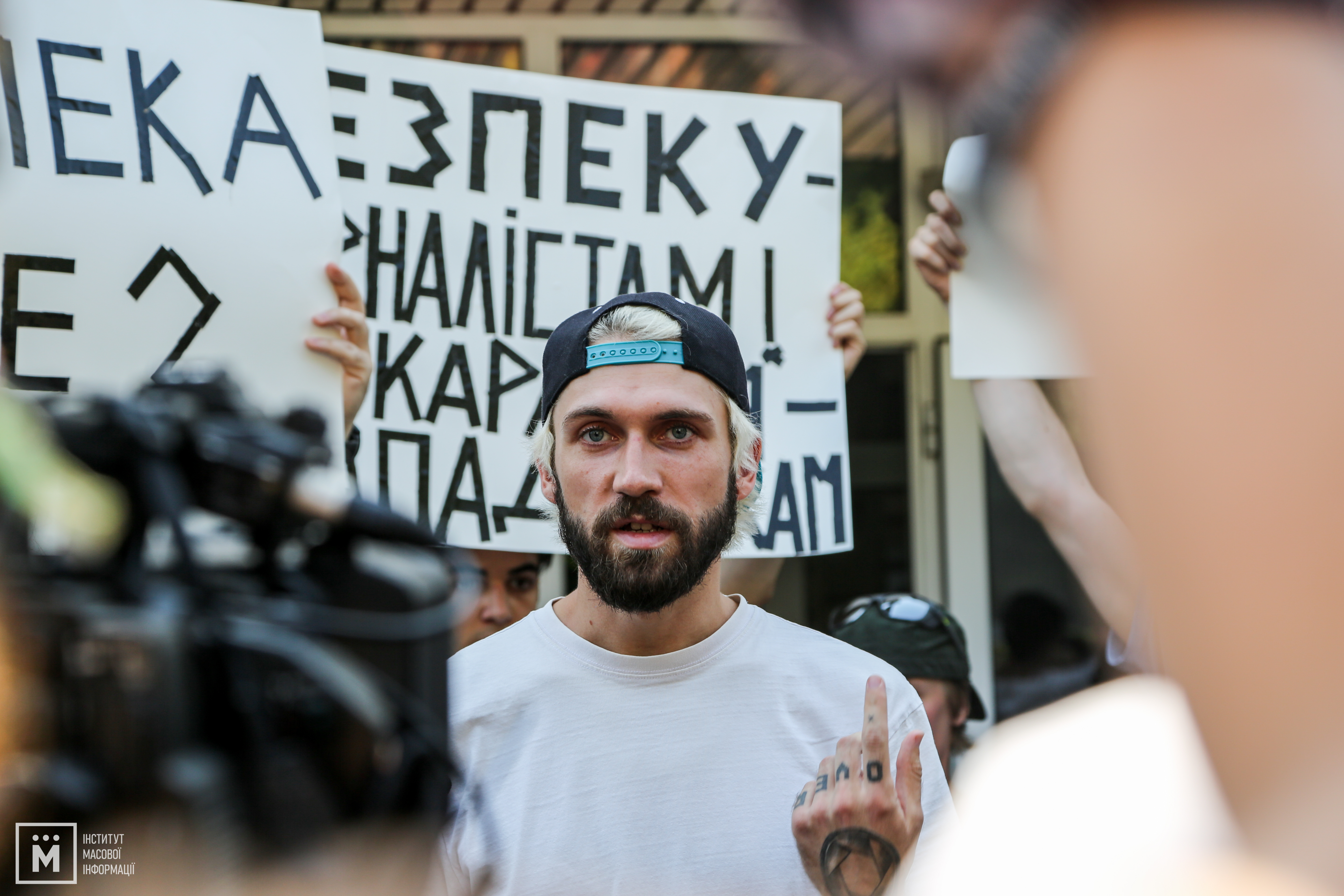 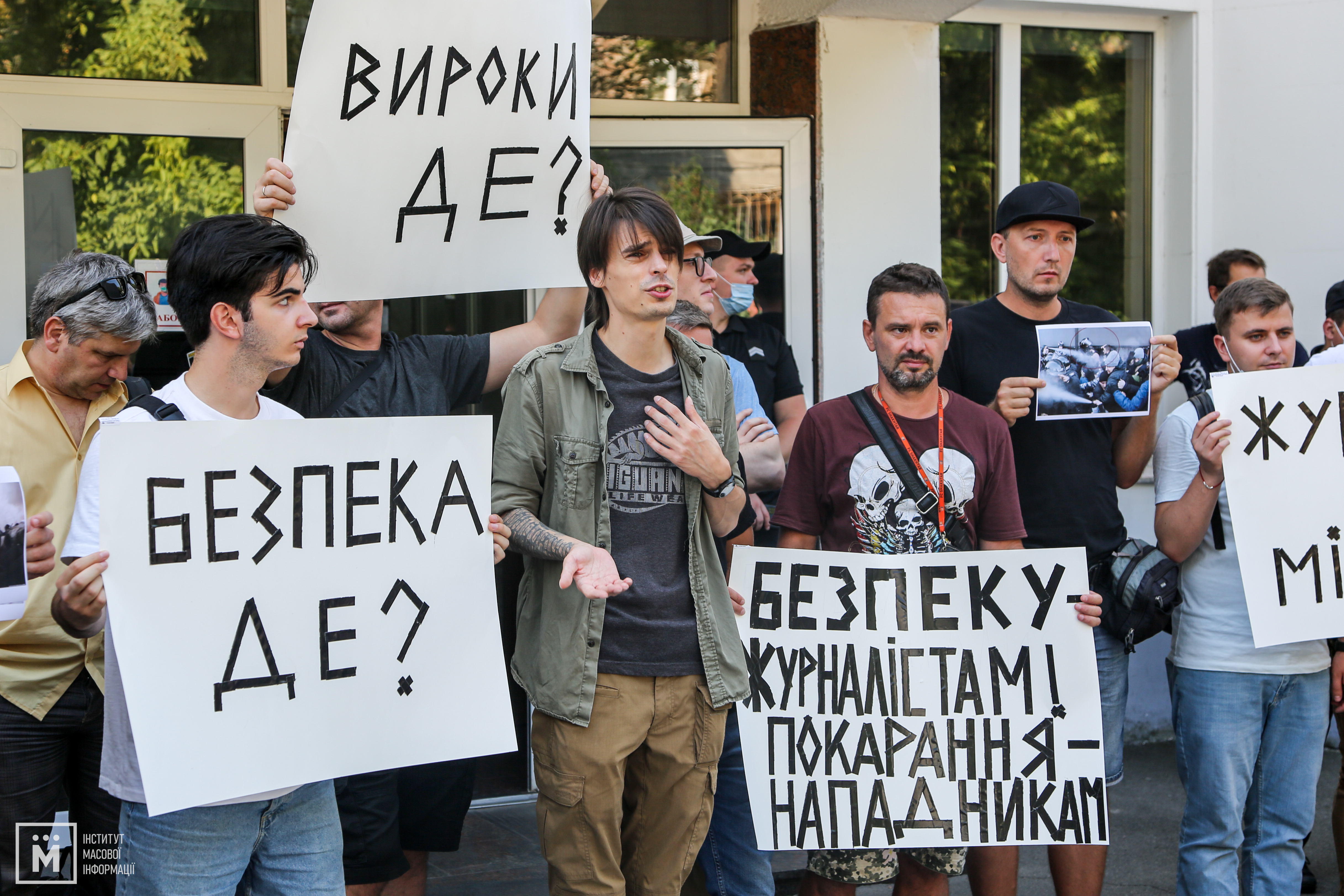 Photo reporters, cameramen, and correspondents brought posters to the Ministry of Internal Affairs with the words "Security for journalists, punishment for attackers," "What about sentences?", "What about security?", "Journalist is not a target." They symbolically stacked their cameras on the asphalt in front of the entrance to the building. 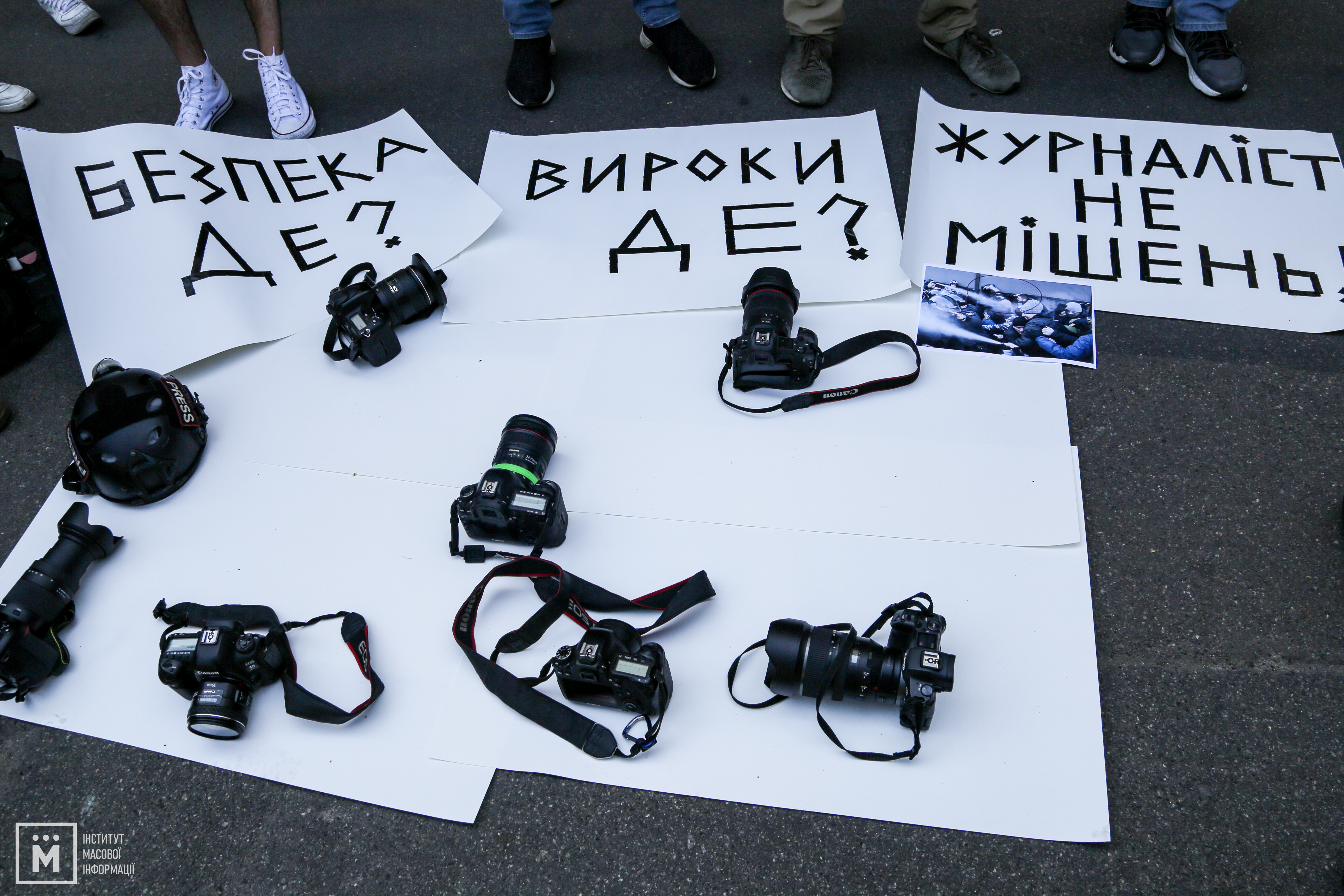 According to IMI estimates, during the first seven months of 2021 in Ukraine there were 11 cases of violations of freedom of speech, of which 80% were incidents of physical aggression against journalists. In 2020, the courts received 14 cases under "journalistic" articles (171 and 345-1 of the Criminal Code), in 2021 there were five court verdicts, including four indictments and one acquittal. Mostly it was probation for 1-2 years, and fines from 850 to 5100 UAH (from $31  to $ 191).

"Sentencing assailants to real punishments is rather an exception to the rule. The stories of our colleagues Serhiy Nuzhnenko, Vladyslav Krasinsky, Dmytro Replyanchuk, Bihus.Info journalists, colleagues from the Skhemy project and dozens of others across Ukraine are only to prove this: "threats, destruction of property, beating of journalists almost never lead to criminal liability," as the participants of the action noted. 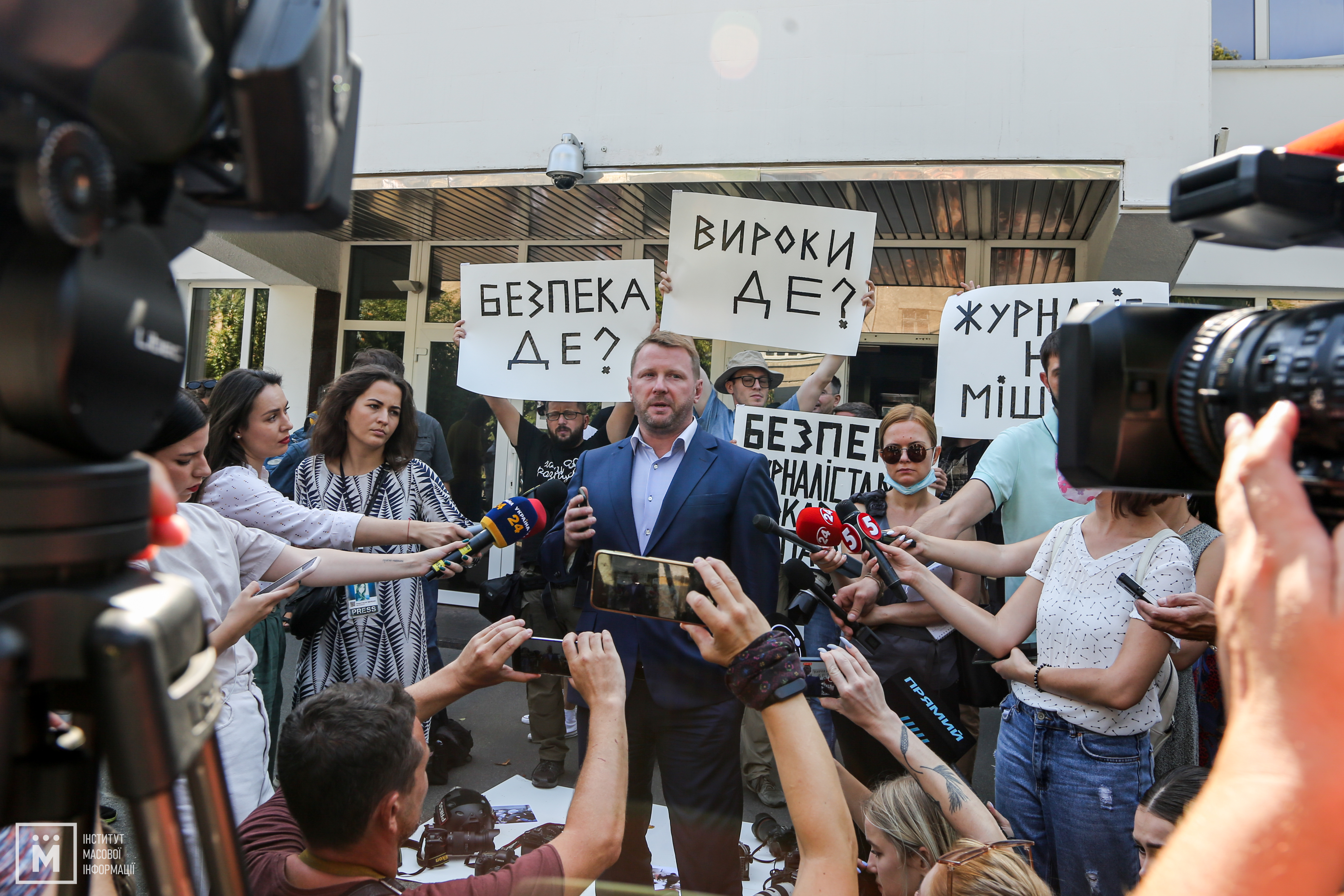 Photo credit: Institute of Mass Information
Radio Svoboda correspondent Serhiy Nuzhnenko brought a photo in which a policeman spays on him with tear gas. The incident happened in March 2018 during the dispersal of a tent camp near the Verkhovna Rada. No one has yet been prosecuted for the incident. During the rally, Serhiy Nuzhnenko asked Interior Ministry spokesman Artem Shevchenko if the identity of this police officer had been established. Shevchenko replied negatively. 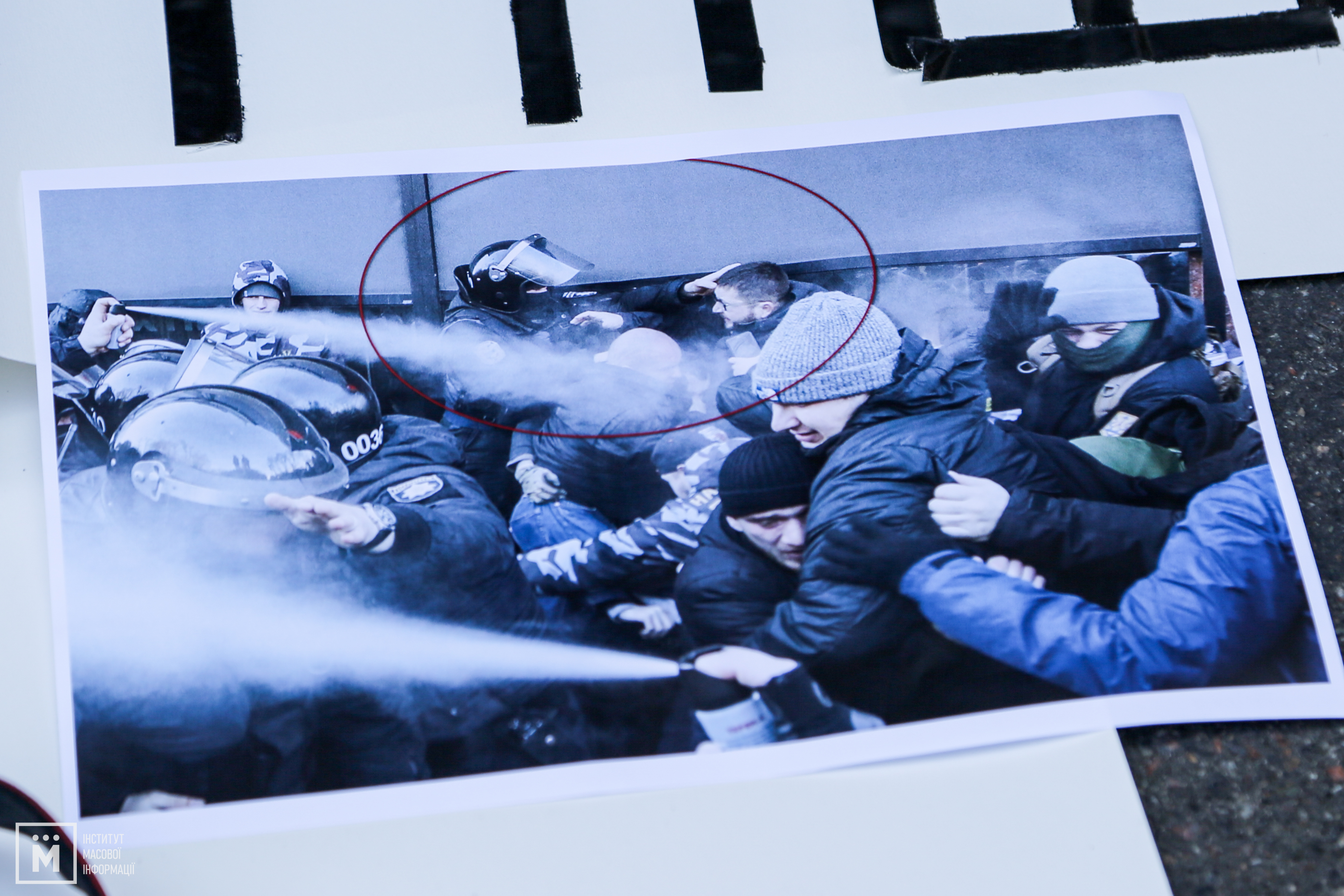 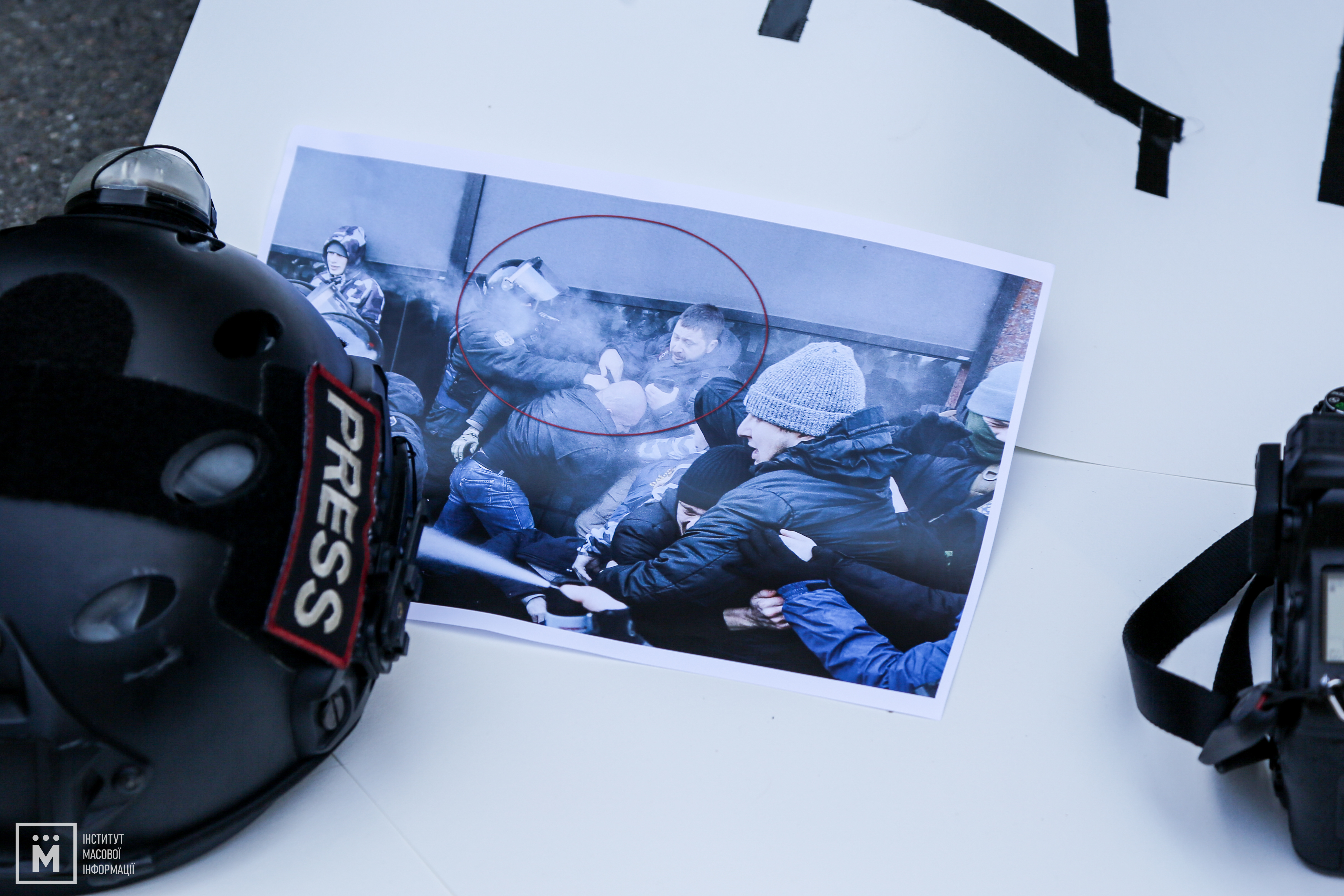 According to Artem Shevchenko, on Wednesday, August 18, the Pechersk court of Kyiv at 12:00 will decide on a measure of restraint for two assailants of Oleksander Kuzhelny, whom Kyiv police investigators served the suspicion notes under Article 345-1 of the Criminal Code (threat or violence against a journalist) and other involved in are wanted.