Police and journalists clashed before municipal council in Zaporizhzhya 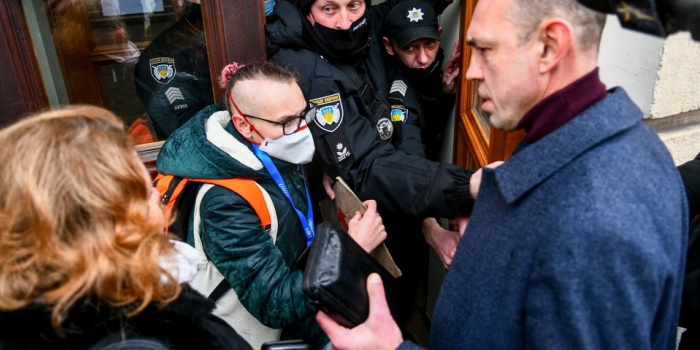 In Zaporizhzhya, the city council was picketed by regional journalists,whom they did not allowed to attend the meeting of the City Council, as Ukrinform reported.

The journalists and police clashed. The police officers closed the central and the back entrances to the City Council building, leaving the media behind the fence.

Journalists called the police and filed complaints about obstruction to their journalistic activities.

At the same time, the MPs from the “European Solidarity” faction prepared a draft decision on “Ensuring the unimpeded right to enter the administrative building of the Executive Committee of the Zaporizhka municpalcouncil” in compliance with anti-epidemic measures.

“At the entrance, it was almost clashing between journalists and the police. We consider it as a gross violation of the law to deny access to the journalists to the building for the plenary session. I sent a letter saying that in accordance with the law and in accordance with paragraph 5 of the regulations of the Zaporizhzhya City Council, the parliamentary faction has the right, and we exercised this right and signed the invitation for mass media to the plenary session. This letter has been left without reply. The mayor referred to the lockdown, but I emphasize to all those who are present here that we cannot interpret Cabinet resolutions or legislation at our discretion. The resolution of the Cabinet of Ministers on lockdown and the introduction of restrictive anti-epidemic measures to prevent the spread of coronavirus in Ukraine, does not mention that the rights of journalists might be restricted. - as the MP Oleksander Konstantinov (Solidarity faction). said at the session.

At the same time, Dmytro Syryi, a member of parliament from the “Unit”y faction, said that the session was broadcast on a municipal TV channel and was thus was not closed-door meeting.

“There is no direct ban (access of journalists - ed.) in the resolution of the Cabinet of Ministers, but this resolution has some prohibitions on presence of a certain number of people per square meters. The chairman is directly responsible for this, ”Siriy added.

After half an hour of discussion, the deputies submitted the draft decision for a vote. Only 19 deputies supported the decision to "hold it open " for journalists. After that, the deputies from the "European Solidarity" left the session hall.

As IMI reported, on January 20, the security guards of the Zaporizhzhya City Council did not allow journalists to attend meetings of standing deputy commissions. The guards justified the refusal with quarantine restrictions.

The Resolution of the Cabinet of Ministers “ On Quarantine and Restrictive Anti-Epidemic Measures to Prevent the Spread of Acute Respiratory Disease COVID-19 Caused by SARS-CoV-2 Coronavirus ” on December 9, 2020 does not restrict the activities of journalists.

For more details about work of journalists during the enhanced lockdown in the period from January 8 to 25, please read the text here..