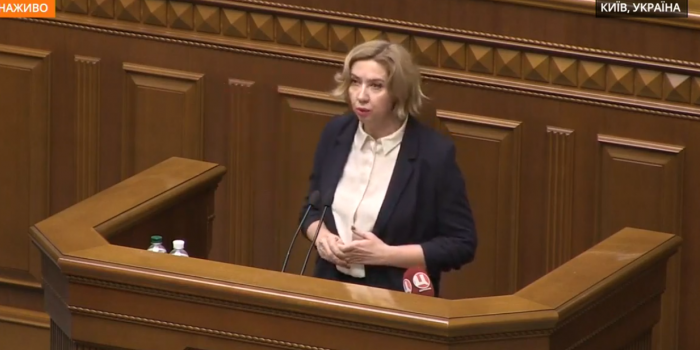 There is any guarantee of physical security. Stanislav Aseyev, sentenced to 15 years in jail, was spoken about. Hundreds of journalists went away. Hundreds of mass media outlets have been shut down,. Hundreds of cases we have been recorded by us last years.

The second position is up to journalists investigators. I guess it is clear, attack are launched by those whom are criticized. Then, photographers and cameramen follow. These are the persons who are always at the tip of the spear. They are the first who get the hit at the actions of protest, at shooting of the reports. And, finally, these are the journalists in the regions. They have no one to hope for. Unfortunately, they have less resources than Kyiv journalists have.

Here is a full speech by the Executive Director of IMI Oksana Romanyuk:

“Dear journalists, dear MPs, dear representatives of the authorities and the international community! In fact, the issues of journalists' safety, the issue of freedom of speech are very specific things that need a strategic approach.

A strategic approach the authorities have to demonstrate. It has to be a vision. This should not be a tactical maneuver. Here we met, talked, and then went home. It should not be like this.

Since the beginning of the year, over the 10 months of this year, 208 journalists have suffered in Ukraine due to their professional activity. Security for me personally, this is issue is very sensible. I never said it publicly, but me myself - I went through the beating, the threats, the public pressure, the searches, the interrogations, and my laptop had been seized. Last year, the door to the IMI office was knocked out. I know how difficult it is when you don't have the strength to move on, when you lie down and you realize that you have to get up, because you realize that if it is not you, so who? For me, the support of my colleagues was very important and that is why the doors of the IMI office will always be open to journalists. We will get those bulletproof vests from under the end of the earth, we will find that money for treatment, but we will help our colleagues.

I'll name the four categories of journalists who suffer the most. The first, of course, is the journalists working in the Joint Forces Operation area. Ukrainian journalists cannot work in the occupied territories and I want the international community to hear it.

There are no guarantees of physical security. They have already talked about Stanislav Aseyev, who was sentenced to 15 years. Hundreds of journalists have left, hundreds of media outlets have been closed, hundreds of cases we have recorded over the years.

In second place are investigative journalists. I think it is clear that they are being attacked by those whom they criticize. Then photographers and cameramen follow. These are the persons who are always at the tip of the spear. They are the first who get the hit at the actions of protest, at shooting of the reports. And, finally, these are the journalists in the regions. They have no one to hope for. Unfortunately, they have less resources than Kyiv journalists have.

Regions are the worst in terms of journalists' safety. Of course, these are occupied territories. Next is Kyiv and the Kyiv region. The second place in our anti-rating among the territories controlled by the Ukrainian authorities are Odessa region, and the third position is divided by Volyn and Dnipropetrovsk regions. I urge the authorities to pay a particular attention to these regions.

And three recommendations. The first is that a lot depends on the political elite, on the failures of the state administration. If there is political will, there will be investigations. This means that we need a systematic dialogue with law enforcement, with the judiciary. On a quarterly basis, IMI representatives in the regions meet with local investigators, and on a monthly basis, we send a list of cases to the police. But this is not enough for us. We need a top-level systematic dialogue. And now I am appealing to the law enforcement agencies to launch this dialogue, to get it working. And we also need to speak with the judiciary.

Second, we strongly oppose the politicization of the issue of freedom of expression and the safety of journalists. Sorry, but it is a specific issue, it concerns a specific security. No populism! No PR! Unfortunately, we see a lot of it, especially from pro-Russian politicians. And I want to say, "Stop!"

And third - mutual support of the journalists. Let's support each other. But let's support based on values, ethics, standards. Because today such odious politicians as Andriy Portnov name themselves journalists. It can't be that way. Therefore, we must unite with you around values ​​and support one another. Thank you".