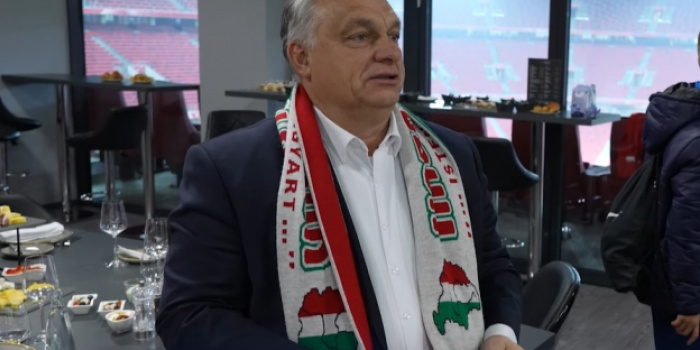 On the evening of November 20, the Prime Minister of Hungary, Viktor Orban, attended a friendly soccer game in Budapest between Hungary and Greece's national teams. Orban wore a scarf depicting the map of "Greater Hungary" which includes parts of neighboring states, writes "European Pravda", citing Index.

The map on the Hungarian Prime Minister's scarf included parts of some EU countries: Austria, Slovakia, Romania and Croatia, as well as regions of today's Serbia and Ukraine. These territories used to be part to the Kingdom of Hungary until the end of the First World War.

Romanian MEP Alin Mituta said on Twitter that EU leaders should sanction and isolate Orban for such acts.

Another irresponsible act of Viktor Orban, who appeared today with a scarf with the map of Greater Hungary. It's a revisionist gesture that puts Orban alongside Putin, who also dreams of border changes. He should be sanctioned and isolated by EU leaders in the European Council. pic.twitter.com/9UwOIU89cN

The Ukrainian MFA spokesman Oleh Nikolenko stressed that "promoting revisionist ideas in Hungary is not conductive to the development of Ukrainian–Hungarian relations."

"The Hungarian ambassador will be summoned to the Ministry of Foreign Affairs of Ukraine and informed of the unacceptability of Viktor Orban's actions," he added.

It is not the first time that Orban has caused backlash by mentioning "Greater Hungary". In 2020, he published a photo of a globe which also showed the outline of the Kingdom of Hungary before the end of the First World War. The incident was met with outrage, especially in Croatia and Romania.

According to the Treaty of Trianon in 1920, the Kingdom of Hungary lost a large part of its former territory. In Hungary, this historical episode is still considered a great shame.

Since the beginning of Orban's tenure as Prime Minister, Hungary has been having disputes with the neighboring countries over the rights of ethnic Hungarians living in the kingdom's former territories. For instance, Orban's governments were generously giving out Hungarian passports to national minorities.

As IMI reported, in Hungary, a state centre developed an 8th grade geography textbook full of anti-Ukrainian propaganda and false facts which may "contidion" schoolchildren to have a hostile attitude towards Ukraine.

The passage is accompanied by a drawing in which Ukraine is being torn apart by a russian bear and two men wearing the symbols of the USA and the European Union. Schoolchildren are being asked: "Which one (of them) should Ukraine belong to?"