In Hungary, a state centre developed an 8th grade geography textbook full of anti-Ukrainian propaganda and false facts which may "program" schoolchildren to have a hostile attitude towards Ukraine.

This is reported in an article by European Pravda.

It is an official textbook developed by the OFI state centre and which is a mandatory textbook for Hungarian pupils.

As noted in the article, there is little geography in the section, and some of it is erroneous. For example, the Hungarian authors seem to have deprived Ukraine of its sovereignty over the Crimean mountains, telling children that the Carpathians are the only mountains in Ukraine, "at the foot of which, historical Hungarian cities – Ungvar (Uzhgorod), Munkach (Mukachevo), Khust – are located."

In the textbook, Hungarian schoolchildren are being convinced that what is happening in Ukraine is civil war, in which russia is certainly non-complicit.

"In multinational Ukraine, the nationalities are distributed very unevenly across the territory. The majority are Ukrainians by nationality, but in the east of the country there is a significant share of russians, and on the Crimean peninsula they are the majority. The two East Slavic languages ​​(russian, Ukrainian) are very similar, and a fifth of the population speaks a mixed russian-Ukrainian language. Despite this, the two ethnic groups are often at odds with each other. Their confrontation also provoked an armed conflict over the Crimean Peninsula, see the picture," the textbook says.

The passage is accompanied by a drawing in which Ukraine is being torn apart by a russian bear and two men wearing the symbols of the USA and the European Union. Schoolchildren are being asked: "Which one (of them) should Ukraine belong to?" 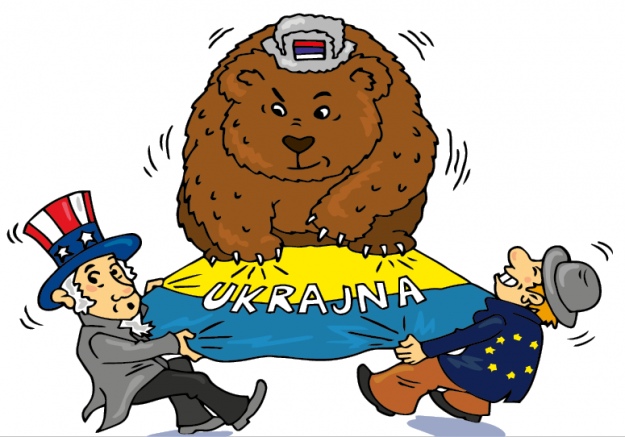 In addition, the article says, the textbook contains blatantly false facts. For example, about Ukraine receiving russian hydrocarbons at a better price than other buyers.

The textbook also explains to Hungarian schoolchildren that Ukraine is a bad place to live. And the Hungarians who ended up in Ukraine are suffering the most.

"The population's health is bad, the life expectancy people can count on is almost the shortest on the continent. The general economic situation in Ukraine is not favorable for Hungarians; moreover, Transcarpathia is one of the most backward regions," the textbook says.