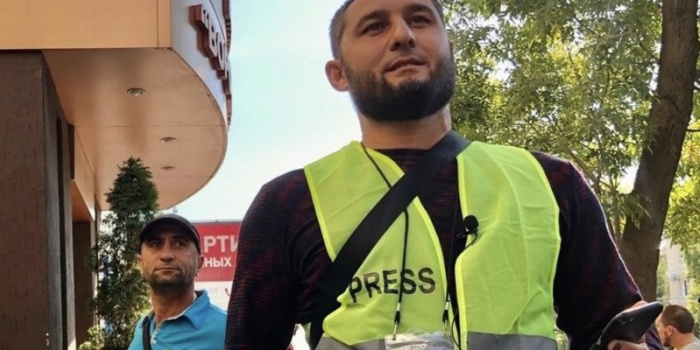 In the Russian-occupied Crimea, deputy chief of police of the Soviet district O. O. Sholomov sent "Crimean Solidarity" and "Grani.ru" journalist Zidan Ajikeliamov a warning about the inadmissibility of violating the law.

This was reported by the public association "Crimean Solidarity".

The warnings from the "law enforcers" cite Article 16 of the Federal Law of Russia "On Combating Extremist Activities" and mention "the inadmissibility of violating the law during public events, such as involving extremist organizations and forbidden symbols."

Should Ajikeliamov fail to comply with this law, the warning states, he will be prosecuted as an "organizer" and may be tried under a number of administrative and criminal articles. These include, the warning notes, "organizing mass riots," "public calls for extremism," "public calls for actions aimed at violating the territorial integrity of the Russian Federation."

At the same time, "Crimean Solidarity" notes, the police did not say what kind of public event they were talking about and why they consider Ajikeliamov its organizer.

In addition, the Russian authorities point out that it is forbidden to wear face-covering masks, the one exception being the Russian-controlled Crimea leader's decree "On the introduction of high alert regime." "It is unclear whether the police forbids wearing medical masks," Crimean Solidarity notes.

As the organization reminds, in previous years, the Russian-controlled Crimean prosecutor's office has been issuing numerous warnings "about the inadmissibility of unauthorized events" to lawyers, Crimean Tatar activists, citizen journalists, and human rights activists in multiple regions of Crimea.

As IMI reported, the eyesight of Timur Ibragimov, a citizen journalist from Crimea who has been convicted in Russia, has deteriorated.

Multiple public human rights organizations are demanding the release of citizen journalist Iryna Danilovych, who had gone missing in Crimea.