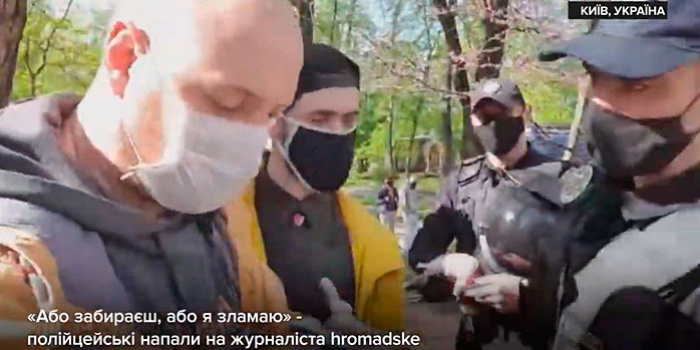 Photo credit: screenshot from the vedeo taken by Hromadske

Representatives of the “Media for conscious choice” and media NGOs in Ukraine call to bring to justice the police officer who knowingly and without proper legal grounds used physical force against the journalist with Hromadske Bohdan Kutepov and broke his technique.

We draw attention to the unlawfulness of police actions and deliberate use of physical force against the journalist who was performing his professional duties. The incident occured during a live broadcast held by Bogdan Kutepov. On the same lines, the journalist presented himself to the police and informed that he was on live stand-up. His emotional reaction is not an excuse to use force against him.

We also emphasize this is inadmissible not to complete the investigation into the incident. Accordingly, we recall the previous cases of attacks on journalists by police officers who have not been broght to account in accordance with the Criminal Code of Ukraine.

We demand that all these cases be properly investigated and that law enforcement officials be held accountable.

The issue of impunity as such translates in further increasing of violence used against journalists. In addition, it increases the distrust of the mass media and the society towards the so-called "tarnished" reputation of the police.

For example, on December 17, 2019, in Kyiv, the National Guard and police officers broke the camera and glasses of the journalist for Radio Svoboda Serhiy Nuzhnenko. The incident occurred, as the journalist was covering clashes between the law enforcement officers and protesters under the Verkhovna Rada due to new bill on farmland market to be voted in the parliament.  Two other journalists with Hromadske, Victoriya Roshchyna and cameraman Oleksiy Nikulin, got injured amid these clashes. In particular, the journalists suffered from tear gas, which was used by the riot police and protesters. Also someone knocked out the phone from the hands of the journalist, as she was filming the clashes. The protesters threw the tent bars at the journalists.

However, police have not yet reported about the progress of the investigation and whether the perpetrators of the crime have been identified. Although from the photo posted by Serhiy Nuzhnenko, one could identify a law enforcement officer who impeded his activities.

In addition, the case of the assault on Serhiy Nuzhnenko on March 3, 2018 in Kyiv, near the Verkhovna Rada , has not been investigated yet. Duting the incident a police officer used a gas canister against him and he received chemical burns.

Also uncompleted remain the cases of assault by members of the special police force on journalists Dmitry Replyanchuk and Sergei Lefter on October 24, 2017 in the Svyatoshinsky court of Kyiv. Despite apologies from the police and a promises to investigate it, they remain suspended. We will remind, in April 2018 the lawyer of Dmitry Replyanchuk Lyudmila Lebed declared that the investigation in the case of his beating is conducted superficially, impartially and without the purpose of establishing the guilty, and the prosecutor's office of Kyiv derails the investigation in the case.

We will remind, according to IMI monitoring, in the first quarter of 2020 experts of the Institute of Mass Information recorded 62 cases of violations of freedom of speech in Ukraine. The vast majority of these violations (43) involved physical aggression against journalists.

Law enforcement officers registered 57 criminal proceedings against journalists in the first quarter of 2020: none were sent to court.

In total, during 2019, law enforcement officers registered 259 criminal offenses against crimes against media workers, of which 14 criminal proceedings were investigated and brought to court .

The letter is open for signature and can be signed at [email protected] .