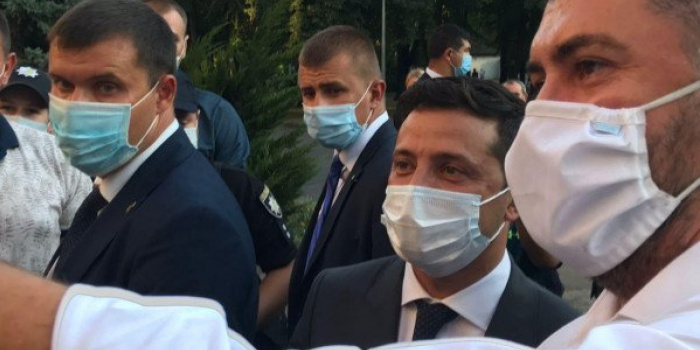 In Kryvyi Rih, local journalists were not accredited for any meeting of the President Volodymyr Zelensky, who came to Dnipropetrovsk region on August 26 and 27 on a working visit, as “Detektor Media” reported.

Journalists were not invited to ArcelorMittal -Kryvyi Rih meeting, to the Kryvbas-Cherkasy football match, meeting with relatives of prisoners of war and missing servicemen, to laying of flowers at the new Ilovaisky Cross monument, or to inspection of the reconstruction of the stadium "Metallurgist", scheduled for August 27.

Presidential spokeswoman Yuliya Mendel has not yet commented it on.

On the eve of the visit, on August 25, the representative of the press service of the Dnipropetrovsk Regional State Administration Nataliya Zborets said that, there wouldn’t be events involving Zelensky in presence of the press, except for the football match "Kryvbas" - "Cherkasy”. The football club was to provide press accreditation for the match.

The club's press secretary Ihor Drobnyi said that “Pershyy Kryvorizky”  was denied accreditation on the instructions of Artem Gagarin, vice-president of the Kryvbas club and the head of the Kvartal 95 author team. The decision to refuse accreditation was made due to the fact that last week 1kr.ua refused to delete the stream from the presentation of the football club "Kryvbas". At the same time, the club did not explain why other media were not allowed to attend it.

Journalists learned about the denial to accreditate all other media when they arrived for the match. Some media outlets were given tickets, but were forbidden to work even in the stands. Only representatives of the Football channel and photographers, who apparently arrived directly with Zelensky, were allowed into the stadium.

As IMI reported, on August 26 in Dnipro, journalists were allowed to ask only two questions to the President Volodymyr Zelensky during his visit.

On August 19, at least four local media outlets in Zaporizhia were not accredited to cover Ukrainian President Volodymyr Zelensky's working trip to the region.

On July 9, Volyn journalists were not allowed to attend all meetings of President of Ukraine Volodymyr Zelensky during his working trip under the pretext of lockdown measures.

On June 26, Kherson journalists, who were not accredited to meet with Ukrainian President, went on strike: they broadcast news without text, published blank pages.

On June 2, Khmelnytsky's vsim.ua and Ye reported that their journalists, as well as journalists from many print and online media outlets, were not accredited to cover President Volodymyr Zelensky's working visit to the region on June 3-4.