Mass media in Zaporizhzhya denied in accreditation to meeting with Zelensky 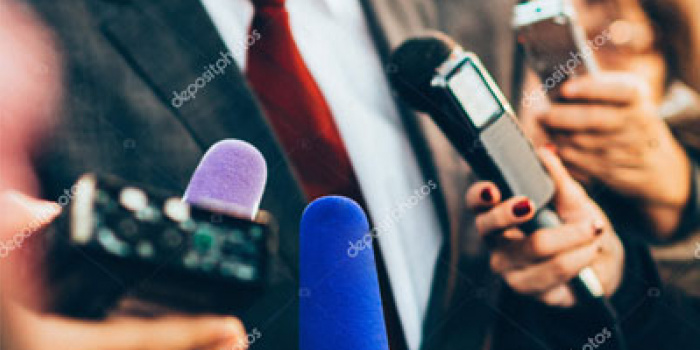 In Zaporizhia, at least four local media outlets were not accredited to cover Ukrainian President Volodymyr Zelensky's working trip to the region, as the IMI representative in Zaporizhia region was inormed by the journalists from the non-accredited media.

The municipal TV channel Z was not accredited. The editor-in-chief of the channel Oleksandr Kovalenko said on Facebook that this was the first time since the TV channel's existence.

“For the first time during the existence of Z TV channel, our journalists did not get into the press pool, which is being formed to cover the working trip of the President of Ukraine to Zaporizhia, which continues today, August 19! Some of our colleagues from other media were accredited last Friday! As to our sources in the Zaporizhia Regional State Administration, they were sifted thrugh and selected by the press service of the President of Ukraine in its sole discretion! ” he wrote.

According to him, on August 18, the Zaporizhzhya Regional State Administration announced its accreditation, "probably only after numerous appeals from outraged Zaporizhzhya journalists and mass media."

According to the IMI representative, journalists of “Zaporozhye Sich” weekly were also not accredited. According to Inna Bakhtina, deputy director of “Zaporizhzhya Sich” newspaper, "selective law has worked in the best traditions of the Ukrainian government."

“I did not want to link such fearings of journalistic stories with the start of the upcoming elections. By the way, during Zelensky's visit, a candidate for the post of Zaporizhia mayor from the “Servant of the People” party was presented”, she said.

In addition, the online publications “Forost” and “RegionNews” were not accredited. According to editor Myroslava Balaban, they could not have anyone on phone number mentioned in press release. “We tried many times, then it was busy, then they didn't answer. Accreditation lasted only a few hours, and then the post was removed as a whole, ”she said.

Denis Rozenkov, a journalist with the Nash TV channel, also claimed he was not accredited.

Journalist Yakiv Noskov said that journalists were given the opportunity to ask only one question during the entire meeting and were not allowed to move during speeches by the President and various officials.

“After Zelensky's ten-minute speech in front of the microphones, spokeswoman Yulia Mendel gave the opportunity to ask only one question, choosing one of the local TV channels TV-5. Then, the "press corner" was stopped,- the journalist said. - At the second location, on the bridges, they did not suppose press corner at all. Moreover, only after the outcry of the press secretary of the head of the regional state administration quarrelling with the state security, the latter agreed to allow only photo and video operators to accompany Zelensky in his inspection of bridges ”.

Also, the journalist said, taking into account the actions of the press service and the President during the meeting, everyone had a clear feeling that the main purpose of Zelensky's visit was not a working trip, but the presence at the presentation of the ruling party list in Zaporizhia region.

“We can say that as a result the working trip lasted maximum one hour, and journalists were allowed to ask one (!) question, and then at the next location (construction of bridges. - Author ) we were literally put in a stall in front of the stage at an openly party event, without possibility to move. I can say that it is clearly not good to hold a pre-election tour under the label of a "working trip", - the journalist summed up.

In turn, the press service of the Zaporizhia regional administration on August 19 reacted to the post of editor-in-chief of TV channel Z Oleksandr Kovalenko and posted a reply with an apology on its Facebook page.

“On behalf of the Zaporizhia Regional State Administration, we apologize that not all media representatives could attend all meetings involving the President of Ukraine. Due to quarantine restrictions, it was not physically possible to accommodate anyone in compliance with distancing rules. At the same time, we invited representatives from ALL Zaporizhia media holdings. We, as well as the journalists too, are interested in a broad and objective coverage of the President's working visit to our region. Moreover, it is very effective, ”the statement read.

As IMI reported, in June, Kherson journalists, who were not accredited to the meeting with President Volodymyr Zelensky, went on strike: they broadcast news without text, published blank pages, and fabricated text from the scene.