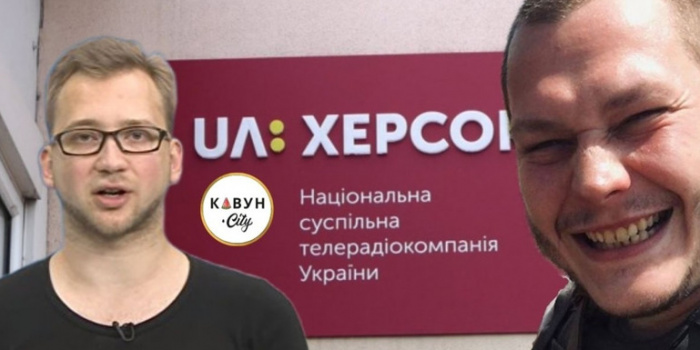 Kherson journalists have found the russian propagandists who were involved in the looting and destruction of the Suspilne Kherson TV channel.

According to Kavun.city, a number of so-called "journalists" who conduct propaganda wherever russian war criminals appear have also visited the channel's office.

We are talking about the propagandist from the terrorist Telegram channel "WarGonzo," the author of the channel "Gen Oprichnika [Z]" Vladislav Zizdok and a former employee of the channel "112 Ukraine" (banned in Ukraine), russian citizen Roman Gnatiuk.

According to the publication, Vladislav Zizdok, a well-known russian propagandist, has participated in the Syrian war, the Donbas war, and the revolution suppression in Belarus. He lives in moscow.

"This pseudo-journalist was one of the first to launch a media campaign against journalists, who has been in our region since the first days together with muscovite paratroopers, and created false content for terrorist pseudo-media. It was in his 'reports' that the information that Suspilne.Kherson is engaged in 'inciting armed resistance to the occupiers' was first voiced," the newspaper writes.

Zizdok is the author and co-author of a number of propaganda films that whitewash the actions of terrorists in Donbas. Namely, the movies "His Stronghold" and "I'll be back again" about the murdered leader of the terrorist "DPR" Alexander Zakharchenko, as well as "Free City of Odesa. Manifesto." The latest video was published on behalf of the so-called "guerrillas" of Odesa who declared war on Ukraine.

Roman Hnatyuk, a former employee of the banned "112 Ukraine" TV channel, has also visited the looted Suspilne Kherson building. He lives in Krasnogorsk, moscow region. He spent most of his "professional" career in Donbas. Prior to arriving in Kherson, Hnatyuk had been involved in several scandals over his activities in Donetsk and Luhansk regions. For example, he managed to become involved in "Channel 17" (Luhansk), channel "112 Ukraine," "State Media Holding" (Donetsk), "First Information Agency," "International Press Center DONI" and "Ukraine.RU" at the same time.

In addition to looting the "Suspilne Kherson" office, Roman Hnatyuk was directly involved in the shutdown of Ukrainian broadcasting in Kherson region and the introduction of muscovite TV channels. He walked into the communication facility unhindered and climbed the TV tower. It was from Hnatiuk's mouth that the phrase "ideological Ukronazi propaganda" was first heard by the Suspilne Broadcaster journalists. He was able to confirm it with only a few books in Ukrainian and printouts with the new rules of Ukrainian spelling, which he found in one of the offices of "Suspilne Kherson" the newspaper writes.

As IMI reported, the russian troops robbed the Kherson branch of Suspilne and are now setting up a propaganda channel.