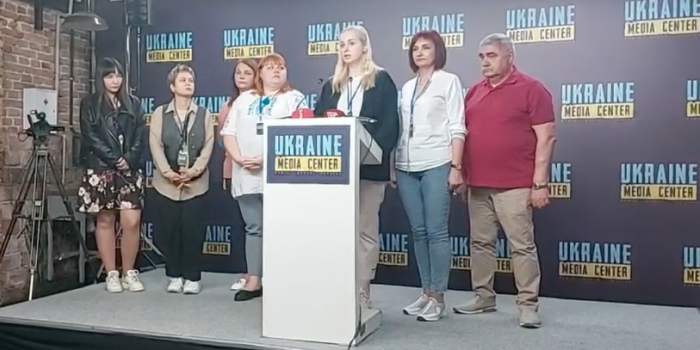 Photo: screenshot from the video

The media workers made this address today, on June 6, on the Journalist's Day at the Media Center Ukraine in Lviv, according to the IMI representative in Kherson region.

Journalists ask the world to speak about Kherson region, which is now under occupation.

“On the day of our professional holiday, we, Ukrainian journalists from different parts of Kherson region who are forced to stay in Lviv and other cities, appeal to you to spread reliable information about the Ukrainian Kherson region, temporarily occupied by russian troops. It is captive, but unbreakable," the address reads.

In the address, the journalists noted that the Kherson region has been under occupation for more than 100 days, the enemy has captured 94% of the region's territory. But, according to the address, from the very first days of the occupation patriotic citizens, including journalists, had been going to peaceful rallies and resisting the armed troops.

"Over time, the pressure has intensified, rallies became impossible, and abductions and torturing of activists, including journalists, began. Many activists were forced to leave the region – and there was no official 'green corridor.' Kherson region has been without communication for a week now – the occupier has shut down Ukrainian mobile operators, and continues the total monitoring of social media communications. They are trying to take away Kherson region's voice, but they cannot destroy its soul. We are Ukrainians, we are free," the address reads.

The journalists urge their colleagues to "speak even more about the captive Ukrainian Kherson region, to spread information from Kherson journalists – this motivates the people living under the occupation."

"Let's get closer to victory together, realizing that Ukraine is fighting for the future of Europe. Encourage the authorities of your countries to support Ukraine and russia's global isolation. Talk about the lack of official corridors for evacuation, turn to international institutions that may affect the humanitarian crisis that the occupier is artificially creating in the region.

"Dozens of our colleagues have lost their job due to Ukrainian media outlets being closed in the temporarily occupied territories, several are behind bars, and journalists need financial and psychological support. We are confident that together we will be able to strengthen the voice of the Ukrainian Kherson region, we will be able to win this audacious information war," the address reads.

It will be recalled that Kherson and part of the region are currently under russian occupation. Persecutions and crimes began almost from the first day of the occupation. On March 2, five armed russian occupiers seized the Suspilne.Kherson building. The occupiers shut down the broadcast of Ukrainian TV channels and launched russian channels on T2.