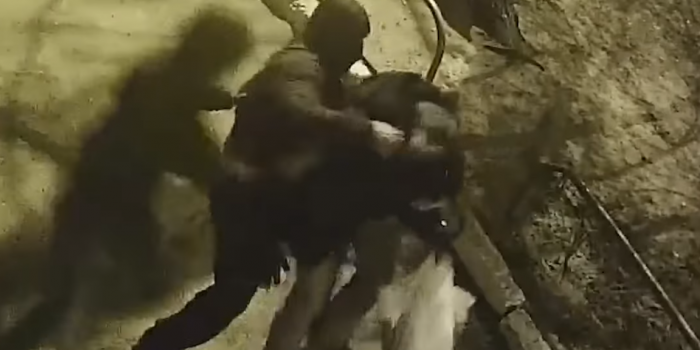 Photo credit: Screenshot from the video takedn by Oleksiy Kusov

In Kharkiv, on the evening of April 20, two unknown persons attacked journalist and director of the Informbureau news agency Oleksiy Kusov, as he reported it on his Facebook page.

The incident happened outside his apartment block, when he was returning from a supermarket. A video released by Kusov from surveillance cameras shows that two men ran up to him, from behind, knocked him down on asphalt and began beating him. The journalist fired several shots at the assailants as they fled.

Oleksiy Kusov considers the assault had been paid-for: "I opened fire, but without glasses I miss the target. I want to tell the comrades who paid for this stuff. First, you will pay me for the food stuff. Please, keep it in mind for the future. "

Commenting on the incident to IMI, Oleksiy Kusov said he related the attack to journalism and his activities in Bulgaria. At the same time, he did not give more details.

He declined to say whom he suspected of: "I do not want to talk about those whom I meant. The investigation has to be carried out. I associate it with journalism and my activities in Bulgaria."

As the Kharkiv National Police said, the attackers seized the victim's purse, which contained UAH 40,000 (around $1479) and credit cards.

"On April 20, at 10:40 pm, Shevchenkivsky police department from the service 102 received a report that two unidentified men had attacked a 35-year-old man near Shatilovska Street near the residence. Superiors, crime scene investigation team of the police department and service officers came to the scene. The law enforcement officers examined the surrounding area and seized the records from the CCTV cameras, "- the message reads.

The criminal proceedings under part 2 of Art. 186 ("Robbery") of the Criminal Code of Ukraine has been opened. The sanction of the article provides for a sentence of imprisonment of four to six years.

As IMI reported, on December 24, 2018, in Kharkiv, some unknown persons robbed the head and journalist of the local news agency Informbureau Oleksiy Kusov and robbed him of $ 9,000.Commenting it on to IMI, Alexei Kusov said that the attack was related to his professional activity, but at the same time refused to give any details "at the request of law enforcement officers".

On February 21, 2019, the Prosecutor's Office of the Kharkiv region reported they had exposed an organized gang in Kharkiv, whose members are being checked for involvement in the attack against the head of the Inform-Bureau, Oleksiy Kusov.