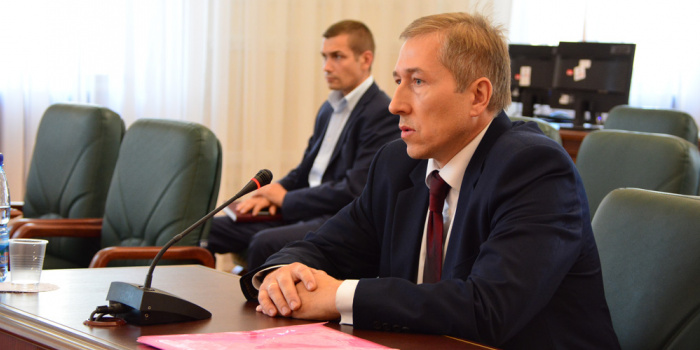 The Disciplinary Chamber of the High Council of Justice issued a reprimand to Stanislav Holubytsky, a judge of the Criminal Court of Cassation due to delaying in Gongadze process Also a disciplinary action is to be taken against him, including non-payment of his salary supplement for the period of three months, as “ Judicial Reporter " reported with reference to the decision of July 26.

The Disciplinary Chamber concluded that Judge Golubytsky had delayed the Gongadze case due to negligence and bad performance of his duties.

The decision can be appealed by a judge to the High Council of Justice.

On July 2 this year, the Supreme Court dismissed an appeal against the sentence of former Interior Ministry Department of External Monitoring Oleksiy Pukach to life imprisonment for the premeditated murder of journalist Georgy Gongadze. The ex-policeman asked to mitigate the punishment, and Podolsky's representatives asked to send the case for a new trial. The court dismissed their claims.

The proceedings were initiated in 2016 by the Supreme Specialized Court of Ukraine, but were not completed until the establishment of the Supreme Court. In 2018, the case files of the criminal matter together with the cassation appeals were transferred to the Criminal Court of Cassation.

The Verkhovna Rada Commissioner for Human Rights, Lyudmyla Denysova, filed a complaint against the Judge Holubytsky, the presiding judge of the Supreme Court.

Cassation appeals in the case of Oleksiy Pukach's conviction have been pending in the courts of cassation for a total of more than five years. Of these, more than three years after being appointed Golubytsky as presiding judge in the case.

The judge explained that the length of the proceedings was related to the exercise by the victim's representative, lawyer Kostina, of the right to get familiarized with the case files, which were classified; admission to the hearings over the case of other defense attorneys at the request of the convicted Pukach, acquaintance with the case materials. There was also a delay on the part of the Pechersk court in considering by another defense counsel Nesterak’s request to renew the missed deadline for cassation appeals against court decisions in the case. In December 2020, Judge Golubytsky filed a disciplinary complaint with the High Council of Justice against the conduct of Judge Karaban of the Pechersk Court. But the complaint was later returned not considered, as Karaban resigned.

The Disciplinary Chamber found that the time intervals between court hearings were in many cases too long, excessive with any substantial grounds for it. Participants reported procedural abuses and delays, and the presiding judge did not appear to respond.

In 2020, the sittings were interrupted for a period of 7.5 months and resumed the following year. The reasons were not only quarantine restrictions, but also the expectation of the results of consideration by the Pechersk District Court of the defense counsel's request to renew the term for cassation appeal of court decisions. At the same time, the position of the accused Pukach was not taken into account, who pointed out the unjustified delay and the need to expedite the consideration due to his advanced age, disability, etc.

The Second Disciplinary Chamber of the High Council of Justice established that the trial of Pukach took about 10 years. At the same time, hearings in the Supreme Court almost doubled the length of proceedings after the courts of first and appellate instances. Although the court of cassation verifies the legality and validity of the court decision only in the part in which it was appealed, and does not conduct a judicial investigation, as the courts of first and appellate instances.

The level of workload of Judge Golubytsky was average in court and could not deprive the presiding judge of the opportunity to take timely measures in this high profile case, which would have facilitated to consider the case with more efficaciousness.

As IMI reported, Pukach headed the Department of External Surveillance of the Ministry of Internal Affairs. In 2000, he led a group of police officers who abducted and killed Gongadze . Pukach personally strangled the journalist.

In 2013, the former lieutenant general was sentenced to life imprisonment.

“Ukrainian Pravda” founder Heorhiy Gongadze went missing in Kyiv on September 16, 2000. In November of the same year, a decapitated body was found in the forest of Kyiv region, which, according to experts, could have belonged to a journalist. In 2009, the remains of Gongadze's skull were found in the Kyiv region. Gongadze was buried on March 22, 2016 in Kyiv.

The publication of Melnychenko's tapes in the fall of 2000 led to a "cassette scandal." Records from President Kuchma's office evidenced the involvement of the head of state and other high-ranking officials and politicians in the assassination of journalist Georgy Gongadze.

On March 15, 2008, the Kyiv Court of Appeals found Gongadze guilty of killing three officers of the Department of External Surveillance of the Ministry of Internal Affairs of Ukraine : Valery Kostenko, Mykola Protasov, and Oleksandr Popovych. The court sentenced them to 12 to 13 years in prison.

In 2011, the prosecutor's office opened a case against Kuchma, but the same year the court closed it.

On January 29, 2013, the Pechersk District Court of Kyiv sentenced Pukach to life imprisonment, finding him guilty of the murder of Georgy Gongadze.

The instigators of the murder have not yet been punished.