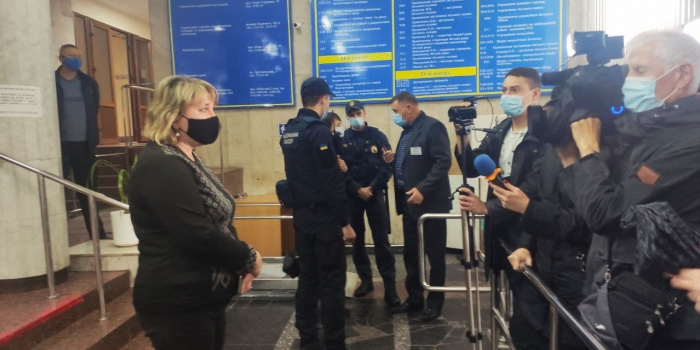 In Kremenchug (Poltava region), journalists of non-communal mass media on May 12 could not get to the sitting of the Kremenchug city council, as Telegraph reported.

The journalists were going to hand over an open letter about restriction of access to the meetings with the participation of city officials and the mayor.

At the entrance, the representatives of four editions "Kremenchug Telegraph", "Visit", "Program Plus" and "Kremenchugska Gazeta" were stopped by the National Guard and the head of the information communications department Yulia Perepelyatnyk. Journalists were not allowed to enter the City Council building, due for quarantine restrictions.

MP Bohdan Lazorenko went down to the press, saying that in a personal conversation with City Council Secretary Yuriy Hrytsenko they discussed the possibility of admitting journalists to the presidium. And due to quarantine restrictions, journalists were denied a live presence at the presidium and advised to watch the presidium meeting via an online broadcast on the Internet.

Deputies Larysa Horyslavets and Bohdan Lazorenko assured journalists that at the session, which will take place on May 25, they will dicuss an open letter to journalists of the city of Kremenchuk to deputies of the City Council.

The journalists filed complaint with the police about the fact of obstruction to the lawful professional activity of journalists (Article 171 of the Criminal Code of Ukraine).

As IMI reported, in Kremenchug, journalists of four editions addressed an open letter to city council deputies with a request to inform local media about official meetings with the participation of the mayor or other representatives of the executive committee and to behave towards all media equally.