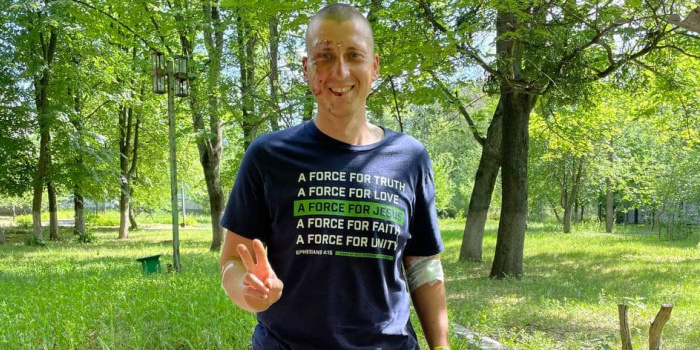 Journalist and serviceman Serhiy Lefter was wounded on the front line. He announced this on his Facebook page.

“North of Kharkiv. We were on the very front line in the 'greens,' holding disadvantageous positions that had already been fired at. A russian tank shot its projectile in such close proximity that I wonder how I can write anything at all. There was no way out. When it hit, everything around just turned white.

"Five small fragments in the legs, one of which struck near the artery. Another went into the elbow – it will remain there for the rest of my life. And about a dozen slight cuts on the arms and legs. A burn covering half of my face. There is a chance that the scars will be minimal. Gone a little deaf in my right ear. Front teeth cracked. Concussion," Serhiy wrote.

He believes that in general, it is "not so great a price compared to the one paid by our boys and girls along the entire front line."

"Every day. But I really hope that even this helped to halt the enemy's advance by at least an inch. Or for a second. Or that it was one less projectile that could have hit someone's child. Whatever counting method works best for you," the journalist wrote.

Serhiy Lefter also thanked his comrades-in-arms who had applied a medical torniquet, carried him away from the battlefield, and took him to the hospital.

In his comment to IMI, Serhiy Lefter said that he had been drafted into the army.

As IMI reported, on April 16, 2014, journalist Serhiy Lefter was taken prisoner by the paratroopers in Slovyansk (Donetsk region). He was accused of espionage and involvement in the "Right Sector."

Serhiy Lefter was an independent observer-journalist of the Open Dialogue Foundation, which carried out a mission to monitor the situation in eastern Ukraine. He went to Slovyansk on April 14 to write a report from the site.

The journalist was released from captivity on May 2, 2014.