The court guard of the Darnytsia District Court in Kyiv denied access to the journalist with  Watchers project, Alina Kondratenko.

The journalist reported about it to IMI.

The guards justified the refusal to let her attend the hearing with new restrictions due to the high incidence of COVID-19. In particular, on August 9, the court issued a new order to organize its work in the context of a coronavirus pandemic.

The journalist published a photo of the order. According to him, the restrictions are introduced from 10 to 24 August "due to the detected and confirmed diagnosis of COVID-19 among a significant number of court staff and to prevent further spread of the disease."

Judicial officers were obliged to restrict access to court premises and admission to court hearings of persons who are not participants in court hearings, as well as persons with obvious symptoms of COVID-19, colds, acute respiratory diseases, regardless of their procedural status.

Persons are allowed to go to court only in masks and after temperature screening. Judges of the court are obliged to hold court hearings only with the participation of the parties to the case.

Later, Alina Kondratenko was allowed to attend the court hearing.

"I showed the court guards the order of the Council of Judges of October 30, which explicitly states: publicity and openness of court proceedings is a priority even in quarantine realities. Judicial guards addressed the question to secretary of the judge Skuba, whether journalists could be present at the hearing. Probably the judge give one’s authorization. And they let me in, ”the journalist said.

The court considered at the hearing the case on the accusation of I. Kromsky (nicknamed "Topaz") ​​of abduction of a person during the Revolution of Dignity. 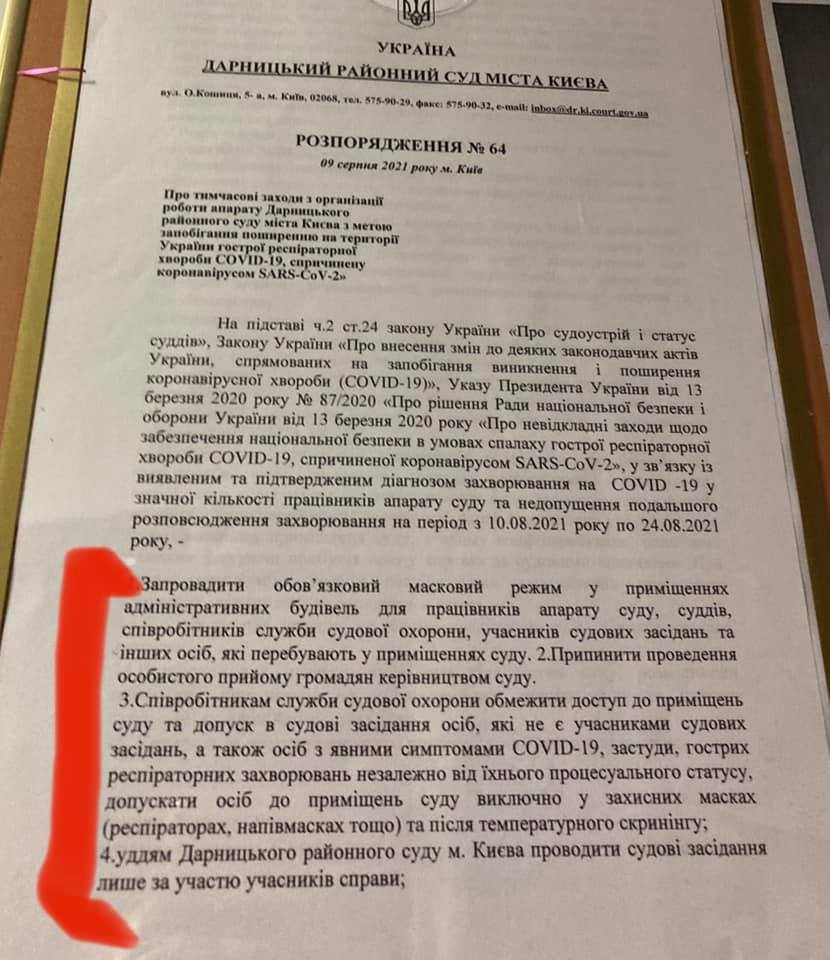 As IMI reported, on August 7, the Pechersk District Court in Kyiv barred journalist and “Watchers” media project manager Olga Khudetska and the photographer of the project Herman Krieger from attending an public court hearing in the trial on  abduction of activists Yuri Verbytsky and Igor Lutsenko in 2014. Olga Khudetska informed IMI about it.

As IMI reported, on June 22, the court guard of the Sviatoshynskyi District Court of Kyiv refused to let in the journalist of the Watchers project Alina Kondratenko. The journalist posted  a court order "On the implementation of anti-epidemic measures", which restricts the access of journalists. The order, dated April 2, 2021, said that from April 5 until the abolition of quarantine, a special regime of the court was introduced, according to which the admission to court hearings of persons who were not participants was restricted. Notice of this order is available on the website of the Sviatoshynskyi District Court .

On July 6, Kyiv's Pechersk District Court restricted journalists' access to hearings, ordering that a judge's prior request be required.