In Mariupol, the occupiers are spreading propaganda under the name and logo of "Priazovsky Rabochy" newspaper 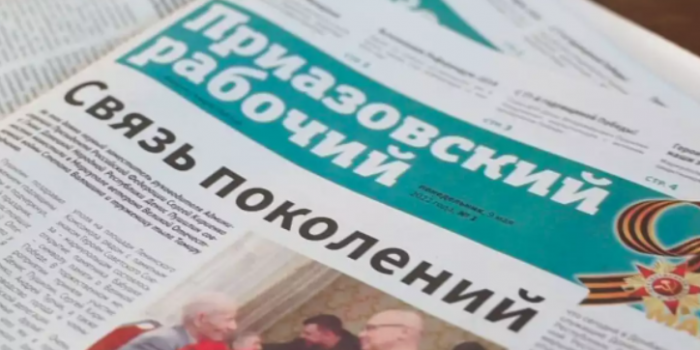 In Mariupol, the occupiers use the name and logo of the newspaper "Priazovsky Rabochy" to spread propaganda. The editor-in-chief of the publication Olena Kalaitan wrote about this on her Facebook, Detector Media reports.

"Today I learned that in Mariupol they are giving out an alleged fresh issue of 'Priazovsky Rabochy' together with the 'humanitarian aid' – with our logo on it, but, of course, not our Ukrainian content.

"Well, our editorial office has predicted in advance that the occupiers would use the trust of our readers over the years and the credibility of the 'Priazovsky Rabochy' newspaper, which we have been – and are – diligently developing and preserving.

Dear readers, I ask you not to read all that the collaborationist government is now publishing as our position: the Ukrainian editors of 'Priazovsky Rabochy' have nothing to do with any line of this newly published newspaper," the statement reads.

The last issue of this newspaper was published on February 23. After the start of the full-scale russian aggression, Olena Kalaitan sent a letter to the chairman of the National Union of Journalists of Ukraine stating that the publication was suspending its publication and that any further use of the brand would be illegal.

As IMI reported, "Priazovsky Rabochy" newspaper is one of the media outlets in Donetsk region which ceased their work due to the occupation.